Trump's 'No 1 On Facebook' Claim Busted: Netizens Remind That Modi And Obama Outrank Him

After Trump's bizarre claim of 'No 1 on Facebook', netizens on Saturday have called out his 'fake news', pointing out that Obama has 55 million followers

After Trump's bizarre claim of 'No 1 on Facebook', netizens on Saturday have called out his 'fake news', pointing out that his predecessor - Barack Obama's Facebook page has 55 million followers, while Trump's page has only 25 million. On doing a fact-check it is revealed that PM Modi's Facebook page has 44 million followers, busting Trump's alleged claims of PM Modi following him on popularity on Facebook. Trump's page does not feature in top 20. 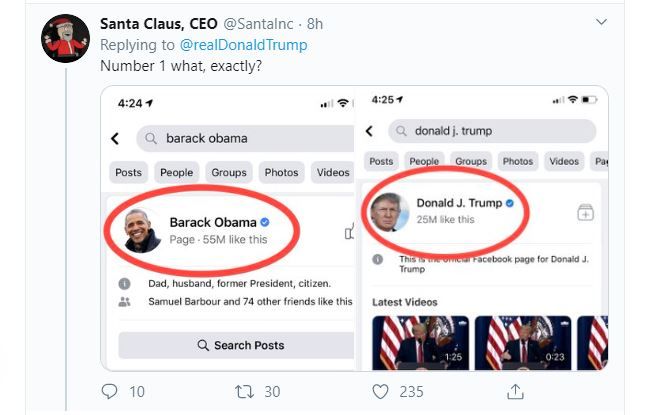 Trump says 'Great honor, I think?', claims he is no 1 on Facebook followed by PM Modi

Earlier in the day, the Twitter-happy US President Donald Trump claimed that he was no 1 on Facebook followed by PM Modi, as announced by Facebook CEO Mark Zuckerberg. Unsure whether it was an honour or not, Trump whose preferred social microblogging site is Twitter, wrote 'Great honor, I think?'. He added that he was soon scheduled to visit India on February 24-25.

Great honor, I think? Mark Zuckerberg recently stated that “Donald J. Trump is Number 1 on Facebook. Number 2 is Prime Minister Modi of India.” Actually, I am going to India in two weeks. Looking forward to it!

After Kem Cho Trump, It could be Howdy Taj Mahal for the US President's India visit

According to the global business data platform Statistica, Trump's Facebook page does not even fall in the top 20 most popular pages for 2019. While the list contains corporations and individuals, the most followed celebrity is ace footballer and Portugal football captain Christiano Ronaldo. Other notable celebrities in the top 20 are pop stars Shakira, Eminem, Rihanna, Justin Beiber and actors Vin Deisel, Will Smith.

Twitter - which Trump uses extensively too has not garnered him the most number of followers. While he does figure in the top 10 most followed accounts with 72.4 million followers, he ranks at no. 9, far behind his predecessor Barack Obama - who tops the list with 113 million followers. Trump is outranked by notable celebrities like Ellen DeGeneres, Lady Gaga, Taylor Swift, Rihanna to name a few. PM Modi falls at number 18 with 53 million followers.

Trump excited to visit Motera: All you need to know about the largest cricket stadium