In an ultimate show of strength, a man from US has broken the previous Guinness World Record of doing the highest number of consecutive bench press underwater

In an ultimate show of strength, a man from Illinois, US has broken the previous Guinness World Record of doing the highest number of consecutive bench press underwater. Greg Wittstock, who had previously made a failed attempt, his time beat the previous record of 42 by doing 62 repetitions. The feat was achieved in the bottom of the lake in St Charles wherein he held his breath for a 1 minute 31 seconds and completed the task with a 50 kg barbell.

A video of the same was posted on the official account of the Guinness World Records on Youtube. The clip features Wittstock saying, “Hey, that was so fun. I got 62 and I got full extension all the way, so no problem,” right after emerging from the water. The video also revealed that his previous attempt in September was discounted as he hadn’t fully extended his arms.

The video has received over  598,392 views since posted with many users commenting on the post. One user joked, 'Fish be like bro gym closed isn’t mean that u start work out in our area" while another wrote," The only impressive thing was him holding his breath underwater so long" Many others had suggestions for the next world record. " Most bench presses on a shipping container whilst on a crane," wrote one user.

'Will attempt it again'

Read: UFC Champion Henry Cejudo Makes It To The Guinness Book Of Records Amid COVID-19 Crisis

Meanwhile, Wittstock also dropped a comment on the post revealing that he would attempt it again, "I had so much fun I’m going to attempt to do it again at Pondemonium this August!," he wrote.  He also said that it was fun and that he was "life long free diver who loves lifting weights." He then thanked the Guinness world writing, "Thanks Guinness for recognizing unusual achievements! We need as many distractions as possible these days!" 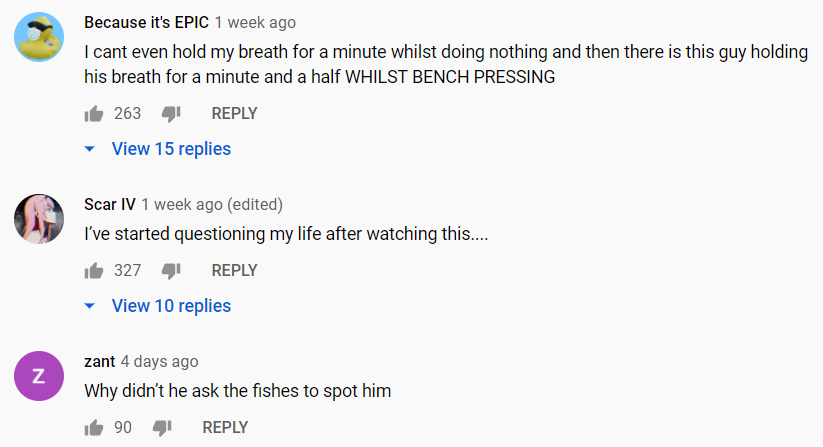 Read: Did You Know That Will Smith Holds A Guinness Book Of World Records?

PEOPLE HAVE PLEDGED SO FAR
LATEST NEWS
View all
3 hours ago
Indian-American man lauded for providing shelter to protesters inside his home
3 hours ago
Los Angeles Mayor plans to lift curfew, cut LA police department's budget
1 hour ago
US CDC: Emergency room visits for non-COVID cases dropped 42% during pandemic
4 hours ago
US seeks block on Chinese airlines flying to US
2 hours ago
US reports 19,699 new coronavirus cases and 995 deaths in 24 hours