Commenting on the arrest of Delhi Deputy CM Manish Sisodia's OSD, BJP spokesperson Sambit Patra alleged that the OSD was taking bribes on the behalf of Sisodia.

Commenting on the arrest of Delhi Deputy Chief Minister Manish Sisodia’s OSD, BJP spokesperson Sambit Patra on Friday alleged that the OSD was taking bribes on behalf of Sisodia. He claimed that Rs.10 lakh was the total amount to be received. Additionally, he accused AAP leaders of being thieves and merely acting as 'Aam Aadmi'. Thereafter, he opined that it was now clear why the Lokpal had not been appointed until now. Incidentally, Patra's charge on the Lokpal comes even as the Centre is yet to approve the Jan Lokpal Bill passed by the Delhi assembly on December 4, 2015.

Writing on the microblogging website Twitter, Sambit Patra said, “The OSD of Manish Sisodia was caught while taking bribes for Manish Sisodia. Now, he had taken just Rs. 2 lakh. He had to take Rs. 10 lakh. Friends, all of them are in cahoots and thieves. They just act as Aam aadmi. Today, I have understood why they have not appointed Lokpal yet.” 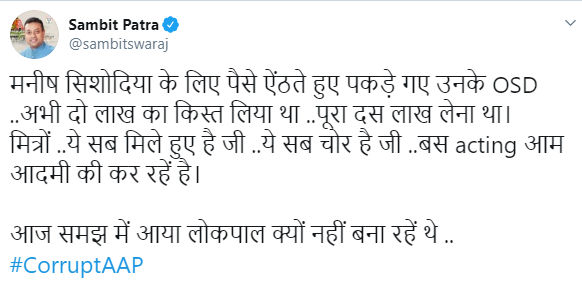 In a late-night operation on Thursday, the Central Bureau of Investigation arrested Gopal Krishna Madhav, a Delhi government official who was working as the OSD to Sisodia. As per sources, he was caught red-handed while receiving a bribe worth Rs.2,00,000 to settle a matter related to Goods and Services Tax. He was immediately taken to the CBI headquarters for questioning. PTI sources also revealed that no involvement of the Delhi Deputy CM had surfaced so far. Reports indicate that he was posted in Sisodia's office in 2015.

Reacting to this development on Friday, Sisodia acknowledged that the arrested person worked as his OSD. He called for the strictest punishment to be meted out to Madhav. Moreover, he claimed that he had helped arrest many corrupt officers in the last 5 years.

The OSD's arrest comes two days before Delhi is scheduled to go to the polls. The results will be declared on February 11. In the previous election, AAP had won a resounding majority bagging 67 out of 70 seats as against BJP who could win only from three constituencies. So far, neither BJP nor Congress has named its Chief Ministerial candidate.