As the heat of Delhi election intensifies, BJP has continued its attack on the ruling AAP with BJP Delhi Chief Manoj Tiwari taking to Twitter to slam Kejriwal 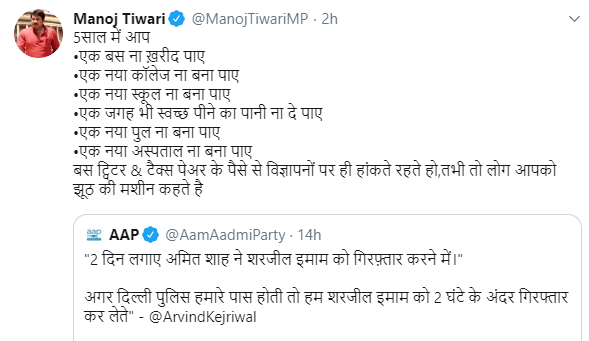 BJP National President JP Nadda hit back at the Delhi CM's speech for insulting the people of Bihar by stating that people of Bihar come to Delhi with Rs 500 train ticket and avail health care facilities worth Rs 5 lakh.

Delhi Chief Minister Arvind Kejriwal said 80 per cent people from across the country came to the national capital for free treatment. While speaking on improved healthcare facilities in the national capital, he had said, "One person from Bihar buys a ticket to Delhi for Rs 500, returns after availing free treatment worth Rs 5 lakhs. While it makes us happy as they are people of our own country, but Delhi has its own capacity. How can Delhi serve people of the entire country?" He made this statement on September 29 during foundation stone laying ceremony at Sanjay Gandhi Memorial Hospital in Delhi.

READ | 'Only 8 Out Of 1024?': Kejriwal Responds After Shah Takes Up 'visit Delhi Schools' Invite