Harrdy Sandhu took to Instagram to share the throwback picture. The photo sees Kapil Dev dressed formally sitting on the sofa. Read on to know more about it

Ranveer Singh starrer 83 was scheduled to release theatrically on April 10, 2020. However, the release of the movie has been postponed amid the Coronavirus outbreak. Speaking of which, Harrdy Sandhu, who is essaying the role of Madan Lal in the movie, shared a throwback picture with the legendary cricketer Kapil Dev.

Harrdy Sandhu took to Instagram to share the throwback picture. The photo sees Kapil Dev dressed formally sitting on the sofa, while Harrdy Sandhu is smiling at him. The candid photo seems to be clicked at the set of 83.

The actor shared the picture saying that 83 would have been released by now. Harrdy Sandhu revealed in his caption that he wants this time to pass away quickly so that everything resumes back to normal. Check out his post below.

The candid picture of Kapil Dev and Harrdy has been doing rounds on social media. It is not only fans who liked the picture. Superstar Ranveer Singh also appreciated the picture by dropping a sweet comment. Have a look at Ranveer Singh’s comment here. 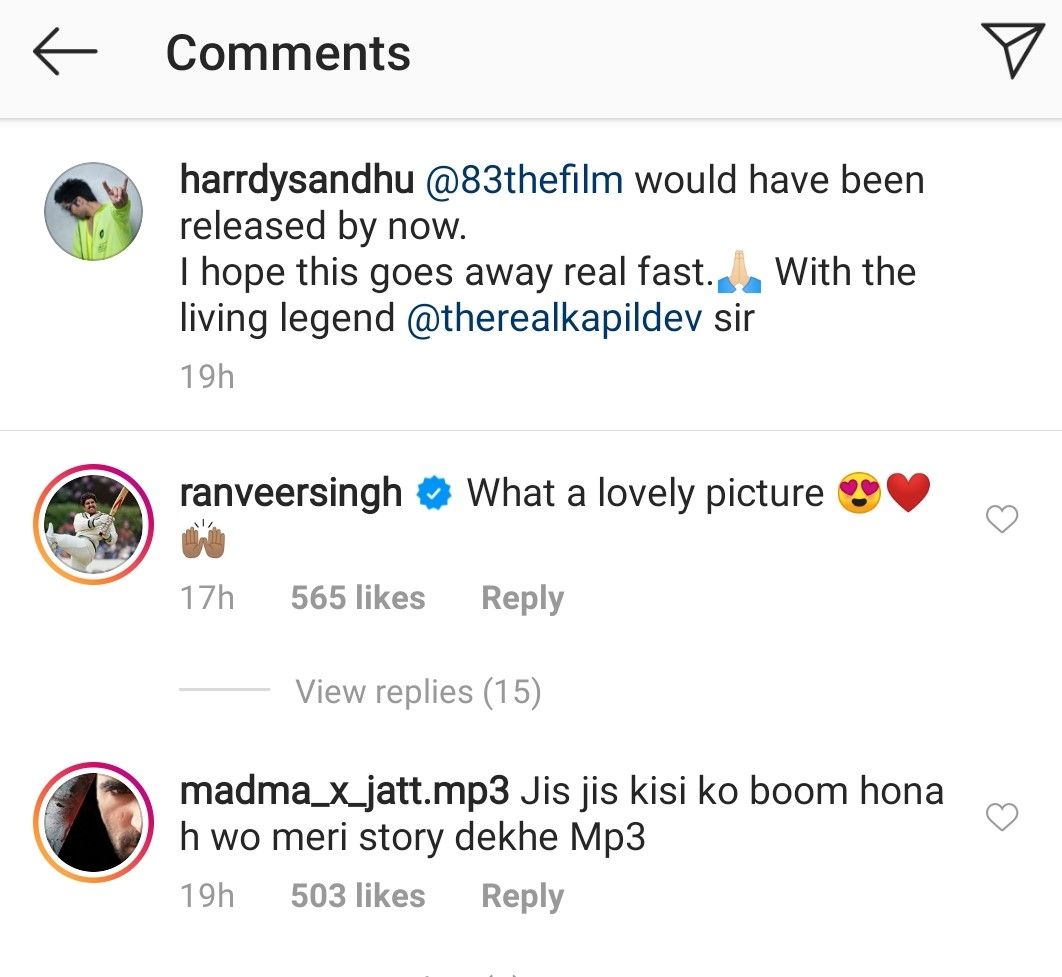 Directed by Kabir Khan, 83 is produced by Sajid Nadiadwala under the banner of Nadiadwala Grandson production. The plot of 83 is based on the story of the 1983 World Cup victory of the Indian cricket team. The film stars Ranveer Singh and Deepika Padukone in prominent roles.

The movie’s release date was postponed; fans are waiting for the official announcement of the new release date. Meanwhile, the posters of 83 have successfully gained the attention of the viewers and have raised anticipation about the movie. Have a look at a few posters of 83 here:

ALSO READ| Ranveer Singh Pulls Off 'Joe Exotic' From 'Tiger King' In Hilarious Meme; Asks Who Did It?

PEOPLE HAVE PLEDGED SO FAR
LATEST NEWS
View all
2 hours ago
Happy Birthday Paresh Rawal: Check out some popular dialogues of the actor from his films
1 hour ago
Sanya Malhotra undergoes surgery after meeting with an accident while cooking?
2 hours ago
Sonu Sood to Amitabh Bachchan; 5 times Bollywood stars proved to be real 'superheroes'
1 hour ago
Radhika Madan travels to Delhi via air; says there was ‘zero physical contact' involved
2 hours ago
Kubbra Sait feels honoured to know Sonu Sood, calls him 'non mythical real flesh hero'