A look of Aamir Khan from his upcoming film 'Laal Singh Chaddha' got leaked from Jaisalmer. It will give you Forrest Gump feels or remind you of Jason Momoa.

Aamir Khan has attained the ‘Perfectionist’ title over the years, and the actor has been reaffirming it with his choice of roles and the transformation for it. His looks in Ghajini, Dangal have been known for this, and the Lagaan star it seems is doing so with Laal Singh Chaddha as well. The 54-year-old has transformed himself completely for the title character, putting on weight for it, and growing a beard for it. While his look as a Sikh man had made headlines, with the makers unveiling the first poster and more, another look sans the turban is also going viral now. He is definitely resembling Tom Hanks, who flaunted a similar look in Forrest Gump, the movie Laal Singh Chaddha is an official adaptation of.

Aamir Khan is currently shooting for Laal Singh Chaddha in Jaisalmer. He was spotted on the sets, wearing a grey T-shirt, a dark green shirt over it, along with loose red pants. However, it was his beard and the long hair, under his cap, that one had never seen the actor as. The look made its way to social media and is going viral now. Tom Hanks seen in multiple looks in Forrest Gump, but mostly as a clean-shaven man, but his bearded get-up comes at a crucial time in the movie. Apart from Hanks, the other name that might come to your mind might be of Jason Momoa aka Aquaman or Khal Drogo, who is also known for his long hair and beard. 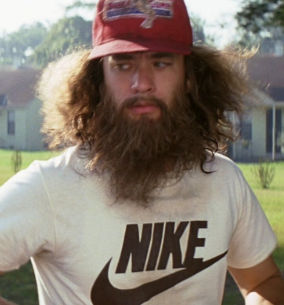 Before Jaisalmer, the team had shot for a schedule in Chandigarh as well. Laal Singh Chaddha also stars Kareena Kapoor Khan, Vijay Sethupathi and Mona Singh. The movie is helmed by Secret Superstar fame Advait Chandan, who was Aamir’s manager before he became a filmmaker. Laal Singh Chaddha will be hitting the screens on Christmas next year. It is set to be Aamir’s first movie in two years, after Thugs of Hindostan, that had released on Diwali 2018. Aamir is also one of the producers of the movie.