"Chhapaak", a co-production between Meghna Gulzar, Deepika Padukone, and Fox Star Studios, is scheduled to be released on January 10. The film stars Vikrant.

Bollywood actor and perfectionist Aamir Khan took to his Twitter handle to praise Deepika Padukone's upcoming film 'Chhapaak' trailer. Congratulating the entire team in his tweet, Aamir expressed that he loved the trailer. He also further mentioned that it was an important film that needed to be heard.

Great trailer, and such an important movie! My congratulations and best wishes to Meghna, Deepika, Vikrant, Fox, and the entire team.
Love.
a.https://t.co/5r7ZeWkG7E@meghnagulzar @deepikapadukone @masseysahib @foxstarhindi 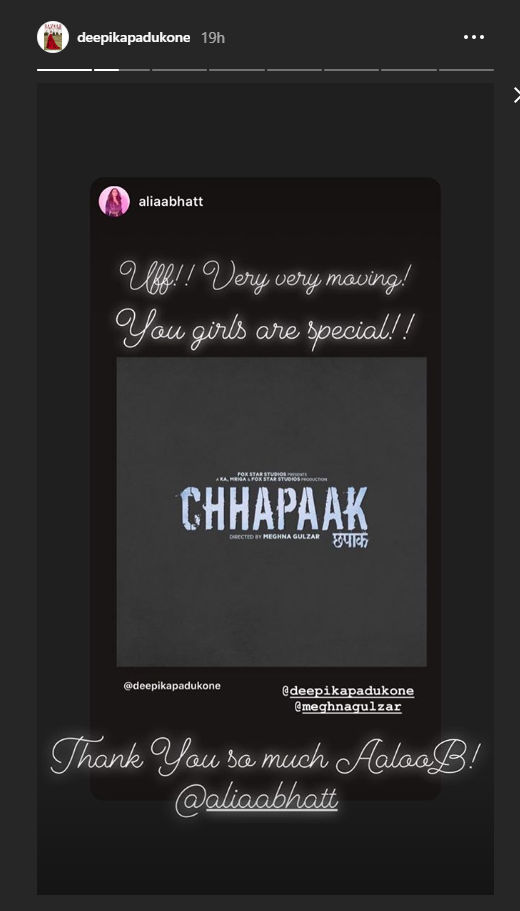 Vikrant, I have always admired your brilliance as an actor ! Every performance of yours has always stayed with the audience ! And with what sensitivity & restraint you have lived your role ,it speaks volume in the trailer itself ! Can’t wait #CHHAPAAK @masseysahib @meghnagulzar pic.twitter.com/6zlyzMcfuc

A story that must be told ! A journey that must be shared ! Deepika , kudos to you for inspiring with such powerful cinema ! It broke my heart , yet made me smile with you ! Can’t wait for it #CHHAPAAK @deepikapadukone @meghna pic.twitter.com/90oZxWYoQx

Deepika Padukone breaks down during the launch of Chhapaak; watch video

Deepika plays the role of an acid attack survivor in the movie, which is inspired by the life of acid attack survivor and activist Laxmi Agarwal. Director Meghna Gulzar said cinema has an extremely "critical role because it is inspiring as well as influencing."  "The influences can be good and negative. Like she (Deepika) said, it's each maker's choice or each actor's choice. It also goes into your own sensibility. If all cinema is only going to be responsible, then you will not go to the theatre for very long. So some level of entertainment is important, but even that can be done responsibly is what I meant," she added.

'Chhapaak' trailer: Vikrant Massey says the film has an important story to tell

The "Raazi" helmer said "Chhapaak" becomes an extremely relevant film considering what's happening to women in the country. "Our effort has been to tell an important story about an important issue. I don't need to talk much about the environment in our country regarding women, we all know that. In an environment like this, the importance of this story increases a lot. "I'm fortunate that my film 'Chhapaak' got Malti's face in Deepika. She shed her identity and embraced Malti's. Without her, what you see wouldn't have been possible."

The film also stars Vikrant Massey, who believes it's important to have a social, collective responsibility, not only from the makers but from people at large. "I absolutely believe in the fact that cinema is a reflection of the society, the times we live in. If we ask this question to makers, writers and creators, about making responsible cinema, somewhere we need to ask ourselves If we are responsible enough in our day-to-day life...," he added. "Chhapaak", a co-production between Meghna, Deepika and Fox Star Studios, is scheduled to be released on January 10.

PEOPLE HAVE PLEDGED SO FAR
Mallika Sherawat attends Amazon founder Jeff Bezos' party, poses with Bill Gates
Janhvi Kapoor back with rumoured ex-boyfriend Akshat Rajan? See pics
Sara Ali Khan's childhood pictures with papa Saif Ali Khan are nothing but priceless
Kartik Aaryan ditches Royal Enfield for a Mini Cooper and its price will shock you
WATCH: Ganesh Acharya's response on woman accusing him of asking her to watch adult films
DO NOT MISS
AJIT PAWAR TAKES A VEILED DIG
INDIA DEFEATS AUS IN U19 WC
YOGI: I AM NOT ANTI-MUSLIM
AYUSHMANN ADMITS TO SLIP IN COMMENT
WHY 2020 BUDGET IS THE TOUGHEST ONE
LIFE INSURANCE FOR NRI IN INDIA