Abhishek Bachchan took to his social media handle to share a post that truly made his day. He received a letter from Chelsea sending him good wishes. Read.

Bollywood actor Abhishek Bachchan took to his social media handle on Saturday, August 1, 2020, to share a post that truly made his day. The actor shared a letter from his favourite football club Chelsea F.C. enquiring about his health. And seems like the actor was very happy after receiving this letter.

Taking to his Instagram handle, Abhishek shared a letter from Chelsea F.C. where they went on to write telling Abhishek that they heard he’s not well at the moment and wanted to get in touch to wish him at the best. It further read that they are very moved when they heard about Abhishek’s health and what he might have been going through. They also went on to send their good wishes, prayers and positive vibes wishing the actor to get well soon.

Abhishek was stunned seeing this letter and it is quite evident through his caption. He wrote, “This made my week. Thank you so much @chelseafc The only thing that would top this is winning the FA Cup this evening. Come on Chelsea!!!” Take a look at the post below.

Seeing this post, fans went on to comment on all things nice on the post. They were also stunned by seeing this post. The post received several likes and comments. Apart from netizens, friends and co-stars of the actor also left sweet comments on the post. One of the users wrote, “Oh wow, this is so cool”. While the other one wrote, “get well soon”. Take a look at a few more comments below. 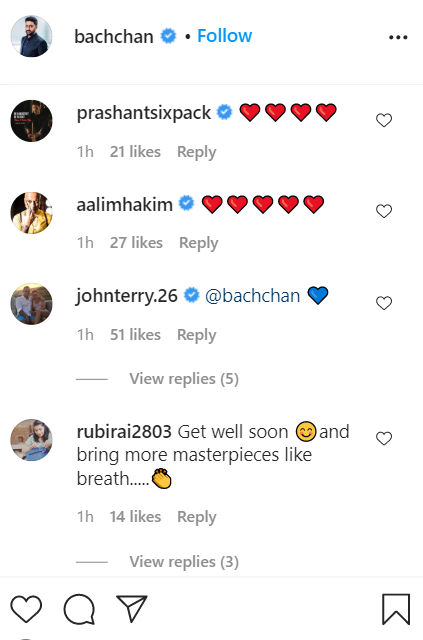 Apart from this post, the actor also goes on to share several other posts on his social media handle. The actor and his father, Amitabh Bachchan had revealed on social media, July 12, 2020, that they had tested positive for the novel coronavirus. The duo is currently being treated for the virus at Nanavati Hospital. Abhishek has been sharing glimpses from the hospital. Take a look.

Abhishek was recently seen in the much-acclaimed series Breathe: Into the Shadows. The series also stars Amit Sadh, Nithya Menen, Saiyami Kher, Hrishikesh Joshi and Shruti Bapna in crucial roles. The series is based on a crime thriller genre, which is helmed by Mayank Sharma and bankrolled by Abundantia Entertainment. The series is streaming on Amazon Prime Video.

Also read | Unseen Pic Of The Day: When The Bachchans 'flipped The Bird' At Cameras; See Details