Abhishek Bachchan who is all set to drop the trailer of his upcoming web series Breathe: Into The Shadows July 1, shared a quirky post on social media.

Abhishek Bachchan who is all set to drop the trailer of his upcoming web series Breathe: Into The Shadows July 1, shared a quirky post on social media. The actor teased his fans with a still from the show where he can be seen frightened and a little bit panicky due to certain circumstances. While captioning the post, the actor tried to indulge his fans in a short gripping game where he reminds his fans with the time of the trailer launch.

Abhishek shared the still on his Instagram page where he can be seen in his character, startled and frightened over something. In the caption he asked his fans to check the top right side of the picture, while the viewers follow the innovative game, the top right side in the picture says ‘sorry I meant top left.’ Once the viewers look at the top left corner of the picture, the lines written there says, ‘I really meant bottom left. ‘As and when one follows the instructions and looks at the bottom left corner of the picture, a line says ‘You have come so far, just check bottom right.” At last, the bottom right line in the post, reveals the release time of the trailer which is noon.

Several fans of the actor praised the web show and hailed Abhishek for this innovative idea for sharing the news about the trailer. One of the users called it “so amazing.” Another user termed called the actor “very smart” in the web show. A third chimed in and dropped a hilarious reply which said that Abhishek used so many left rights and up-downs just to inform about a trailer launch. Another user called it a clever move to pique the curiosity of the fans about the trailer launch. 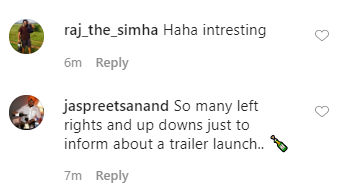 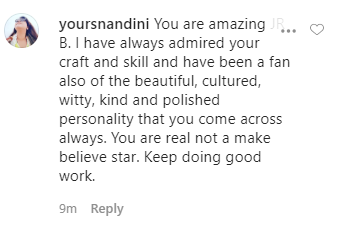 Earlier on June 29, Abhishek Bachchan shared the glimpses of the antagonist of his upcoming series Breathe: Into The Shadows. The 55 seconds teaser has a tensed Abhishek Bachchan searching for his daughter Siya on the streets. Meanwhile, an unknown person, who is introduced as the kidnapper warns Abhishek Bachchan's character of something unpleasant.

Breathe: Into The Shadows marks the digital debut of Abhishek Bachchan. The series stars Abhishek Bachchan, Nithya Menen, Amit Sadh, and Saiyami Kher in the lead. Breathe: Into The Shadows is touted to be an emotional thriller, which is the sequel to Amazon Prime's popular series Breathe. The forthcoming series is directed by Mayank Sharma and bankrolled by Vikram Malhotra under his production banner Abundantia Entertainment. The Abhishek Bachchan and Nithya Menen starrer will premiere on Amazon Prime Video on July 10, 2020.

Read: Abhishek Bachchan Is All Set For '#Taketwo' As He Completes 20 Years In Bollywood

Read: Abhishek Bachchan Shares First Glimpse Of 'The Kidnapper' From 'Breathe: Into The Shadows'