Actress Leena Acharya, Known For Work In 'Hichki' And TV Shows, Passes Away

Actress Leena Acharya, known for work in 'Hichki' and TV shows, passed away. Her death was mourned by Class of 2020 co-star Rohan Mehra, among others.

Actor Leena Acharya, known for her work in Television and films, has passed away. As per reports, she was suffering from kidney-related ailments and died of kidney failure. She breathed her last in New Delhi on Saturday.

Numerous artists of the film industry expressed their grief over Leena Acharya's death. One of her popular roles had been in Class of 2020 web series. One of the leads of the show, Rohan Mehra mourned his co-star’s loss.

Sharing a selfie, he recalled how they had been shooting for the show at the same time last year. 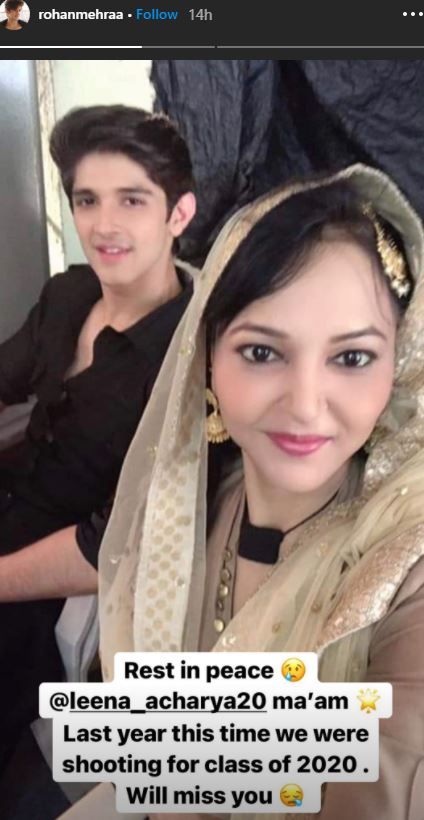 READ: 'Wipeout' Contestant Passes Away After Competing In Obstacle Course; Details Inside

Actor Abhishek Bhalerao expressed his sadness over the news, and remembered her as an ‘an amazing actress', 'a hustler’ and a ‘beautiful soul’. He added that she was one who would apply and go regularly to auditions.

He also shared his ‘last conversation’ with Leena Acharya in which he asked her to come to Mumbai. She had then replied that she was only resting this year and could only return to Mumbai next year.

My last conversation with Leena Acharya.....May your soul Rest in Power @leenaacharya2 An amazing actress a hustler, one who would apply and go regularly to every audition I would share with her. A beautiful soul. #RIPLeenaAcharya #Actress pic.twitter.com/WIRTxkGKEm

Leena Acharya had worked in the Rani Mukerji-starrer Hichki, that had released in 2018.  She has mainly worked in TV shows, many of them very popular like Savdhaan India, Seth Ji, Aap Ke Aa Jane Se,Crime Patrol. Meri Hanikarak Biwi, CID, Pardes Me Hai Mera Dil, Beyhadh and web series like Gandii Baat, among others. Her Instagram handle is filled with videos of her performances, and pictures on sets with her co-stars.

WE RECOMMEND
2 months ago
Amitabh Bachchan wishes 'all the best' to Maniesh Paul and Raghuvendra for 'Hichki'
2 weeks ago
Asif Basra's death: A look at the late actor's illustrious OTT career
8 months ago
Rani Mukerji birthday: Times the 'Hichki' star played 'Pooja' onscreen
2 weeks ago
Rohit Saraf opens up about playing mind games with Anurag Basu to get details of 'Ludo'
6 days ago
Rohit Saraf recalls auditioning for '50-60 ads in a month' and getting selected for none