Adah Sharma recently shared a video of her making khayali pulao but the video has a major twist in it. Watch the video to know the major twist.

Adah Sharma is an avid social media user. The actor goes on to entertaining fans with her quirky videos and photos on her social media handle. And yet again Adah Sharma managed to send fans into a frenzy with her recent post. The actor recently shared the recipe of how to make "khayali pulao" with a quirky twist.

Adah Sharma recently took to Instagram to share a video of her making khayali pulao but the video has a major twist in it. In the video, Adah Sharma can be seen telling fans that she going to make khayali pulao and also tells them that it is a complicated recipe. She starts the procedure of cooking and soon begins adding invisible ingredients into the pan.

Along with the video, she also said: "Fans to tag their friends who should eat this Khayali or someone who wants to lose weight." She also revealed that in many of her interviews that she’s lost weight because she cooks her own meals and if anyone wants to lose weight they should try this recipe. Check out Adah Sharma’s invisible khayali pulao.

After seeing this video, fans went on to comment on all this fun. Most of her fans burst out in laughter seeing this funny act of Adah Sharma. Check out a few comments from fans. 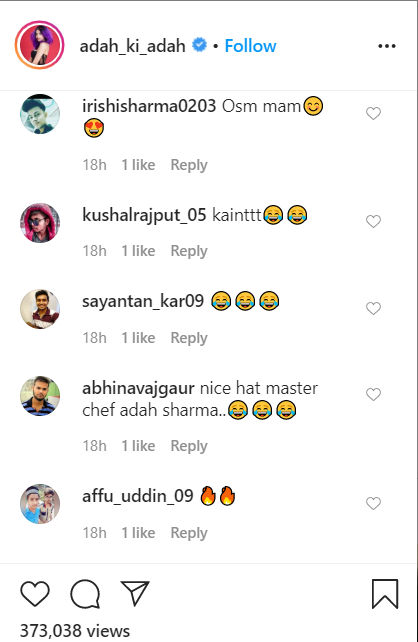 Off late, Adah Sharma has been entertaining her fans with such quirky photos and videos. She goes on trying working out, re-creating Bollywood looks, and many more. Check out a few funny videos of Adah Sharma from her Instagram handle.

PEOPLE HAVE PLEDGED SO FAR
LATEST NEWS
View all
49 mins ago
This day that year: taapsee gushes over virat kohli's photo, calls him 'captain with swag'
13 mins ago
Mahesh bhatt thanks anupam kher as their 'inspired creation' 'saaransh' clocks 36 years
38 mins ago
Bhumi pednekar's lovely fan-made art is a delightful treat for her fans
34 mins ago
Sanjay dutt misses dad sunil dutt on his death anniversary, thanks him for having his back
1 hour ago
Akshay kumar resumes outdoor shoot, films covid awareness ad with director r. balki