Tiger Shroff recently turned 30 years old yesterday, on March 02, 2020. He recently shared a letter on his social media where he thanked fans for their love.

Yesterday, March 02, 2020, was the 30th birthday of the massively popular actor, Tiger Shroff. Fans flooded social media with well-wishes for the actor. Even a few other Bollywood celebs, such as Disha Patani, joined in and sent Tiger Shroff heartfelt messages. Tiger Shroff has now shared a post on his social media, where he penned down a letter of gratitude to all his friends and fans who showered him with love and affection on his birthday. 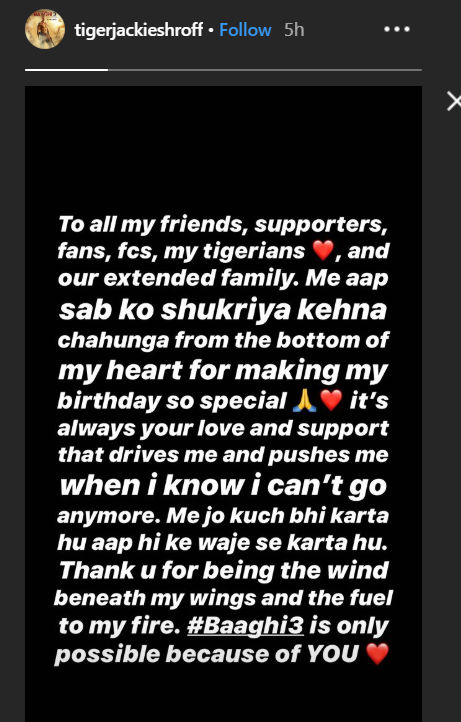 Above is the heartfelt letter that Tiger Shroff shared on his Instagram story. Tiger Shroff dedicated the letter to all his friends, family and fans, who supported him through his career. He thanked them all from the bottom of his heart for making his 30th birthday a truly special one. Tiger Shroff even claimed that it was the love of those around him that pushed him further, even when he was about to give up.

He also revealed that whatever he did, he did for his fans and friends. Finally, Tiger Shroff thanked his fans for being his beacon of hope and claimed that they were the fuel to his fire and dedication. He also stated that Baaghi 3 was also possible thanks to the support of his fans.

Baaghi 3 will be the next film to star Tiger Shroff in the lead role. The action film also stars Shraddha Kapoor and Riteish Deshmukh in prominent leading roles and is directed by Ahmed Khan. The movie is set to release on March 06, 2020, and is produced by Nadiadwala Grandson Entertainment and Fox Star Studios.

Tiger Shroff is also set to feature in Heropanti 2, which is the much-awaited sequel to his very first debut film, Heropanti. The makers of Heropanti 2 have also shared the first look poster for the film, only a few days before Tiger's 30th birthday. The film is set to release on July 16, 2021.