A celebrity photographer recently shared some unseen pics of Akshay Kumar. However, fans were more interested in Akshay's unique outfit in the photos.

Also Read | Akshay Kumar seems to be favourite for internet memes, check out some popular ones 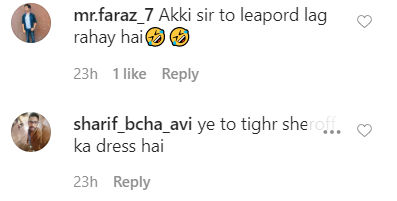 Akshay Kumar was all set to return to the big screen in Rohit Shetty's Sooryavanshi. Unfortunately, the film was pushed back indefinitely due to the coronavirus pandemic. However, Akshay Kumar recently did his bit in the battle against coronavirus by donated a sum of â‚¹25 crores to the PM-CARES fund.

Also Read | Blast from the past! Akshay Kumar's uber-cool hairstyles from the 90s

PEOPLE HAVE PLEDGED SO FAR
LATEST NEWS
View all
22 mins ago
Hina Khan's 'quarantine routine' all about working out and reminiscing good old days
13 hours ago
Shraddha Kapoor shares a funny 'Stree' style poster that shows how to keep COVID at bay
11 mins ago
Anushka Sharma's week was all about interviews, COVID-19 concerns and old memories
1 hour ago
Apurva Asrani buys house with partner, says 'It is time LGBTQ families are normalised'
15 hours ago
Anupam Kher to launch autobiographical play 'Kuch Bhi Ho Sakta Hai' on his website