The hilarious video sets the tone for the much anticipated Akshay Kumar starrer comedy entertainer 'Good Newwz' which is set to release on December 27, 2019.

Akshay Kumar took to his twitter handle and posted a hilarious BTS video of the fun on the sets of his upcoming film Good Newwz. The 2-minute long video features the makers of the film revealing how much fun it had been to shoot with actors like Akshay Kumar, Diljit Dosanjh, Kareena Kapoor and Kiara Advani. It also shows some BTS pranks played by the actors making the shoot an incredibly fun experience. Akshay Kumar captioned his post by stating that there is bound to be good vibes wherever there is Good Newwz.

Netizens have resonated with the thought in the BTS video and have commented on the post with anticipation for the release of the film. Akshay Kumar's laugh and the funny pranks by the actor have been the talk among fans online. The netizens are in splits over the fun video in which the director himself calls the situation 'mental' when the actors unite.

Take a look at the netizens' comments: 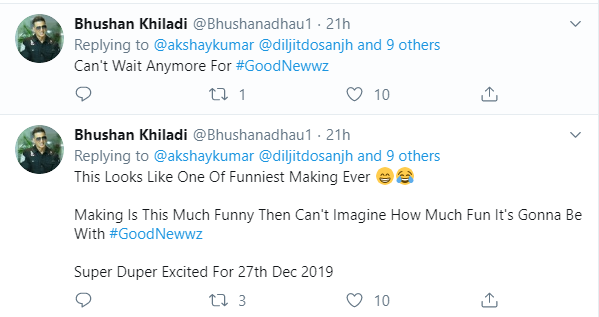 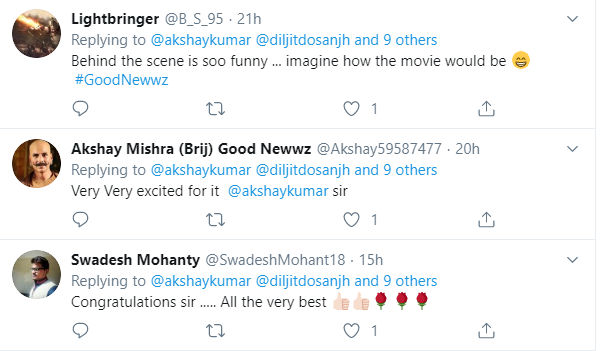 Meanwhile, Akshay Kumar who was last seen in Housefull 4 is currently promoting Good Newwz in full swing. The actor has been actively posting updates about the film on social media through his Twitter and Instagram accounts. On Saturday, he announced that he will be presenting his Toilet: Ek Prem Katha co-star Bhumi Pednekar in a thriller titled 'Durgavati'. He has a bandwagon of projects for himself like Rohit Shetty's Sooryavanshi, Raghava Lawrence's Laxmmi Bomb, Farhad Samji's Bachchan Pandey and the much-hyped 'roller coaster spy ride' Bell Bottom among others scheduled for the upcoming years.