Amid quarantine, Ali Fazal has been reconnecting with his old hobby of writing and reading poems. The actor recently shared a beautiful poem about self-love.

The coronavirus lockdown has confined people to stay indoors and practise social distancing. Amid these tough times, people are focusing towards brushing up their old skills or indulging into trying something new. Recently, actor Ali Fazal shared a poem on his Instagram and his fans had a quirky way to react to it.

Also Read|  Ali Fazal asks why Ramzaan is being called Ramadan, says 'did I miss the name change?'

Ali Fazal was seen playing the character of Guddu Bhaiyya in the Amazon Prime's series Mirzapur. As soon as the actor posted the picture, his fans started complimenting him in the Mirzapur 2's Guddu Bhaiyya style. One of the users quoted his own dialogue from season 1 and said, "Guddu Bhaiyya writing poems in quarantine be like - shuru majburi mein kiye the ab maja aa rha hai". In the recent past, Amazon Prime announced the second season of the hit series Mirzapur titled as Mirzapur 2. In the new teaser, Ali Fazal is seen portraying the role of Guddu Bhaiyya and is also seen as one of the main characters of the series. 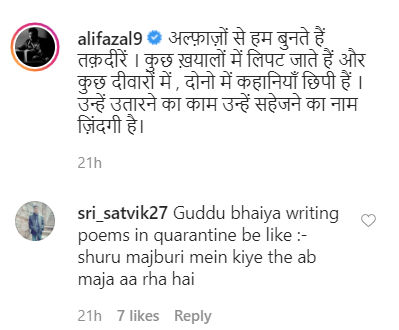 Also Read| Ali Fazal reveals two characters from his movies he would love to hang out with; Read here