Alia Bhatt and Rakul Preet Singh were seen sporting a similar type of dress recently. The two beauties were called out by Diet Sabya for 'copying'

Diet Sabya never fails to point out celebrities and fashion designers who replicate designs of international artists. The popular Instagram account is anonymous and no one knows who's this group of people who are revealing the truth behind many fashionable outfits. Many Bollywood celebs and designers have been busted for wearing and recreating outfits that are copied from several international designers and celebrities.

Diet Sabya not only reveals the inspiration behind many attires but they also disclose photoshop images and filtered photoshoots. Even after being known to point out celebrity rip off outfits, many well-known actors from the film industry like Taapsee Pannu, Sonam Kapoor, Alia Bhatt and more follow the account.

This time Diet Sabya once again called out on Alia Bhatt and Rakul Preet Singh for sporting a similar type of attires. Read to know more:

Earlier, Alia Bhatt sported an ivory coloured one-shoulder heavily sequin gown with a thigh-high slit and cape-like jacket detail. She kept her look minimal by opting for a sleek mid-parted hairdo with a messy ponytail.

On the other hand, Rakul Preet Singh recently opted for a similar ensemble in metallic silver colour in a different type of fabric. She kept her makeup minimal and went for a similar mid-parted sleek hairdo with a messy ponytail. Rakul's gown also featured a thigh-high slit but a flowy fabric on one side.

Diet Sabya called out on Rakul Preet Singh for copying Alia Bhatt's look. But this time Diet Sabya fans think that the page is out of content and just post anything. The latest post did not go down well with netizens and they together called out on Diet Sabya to upgrade their content and to stop criticizing stars for no reason. 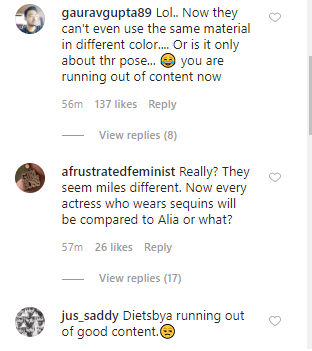 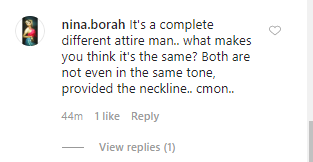