Alia Bhatt and Ranbir Kapoor mourned the unfortunate demise of Taj Mahal hotel employee Ronald D'Mello due to the COVID 19 pandemic. Read on to know more.

The COVID 19 pandemic has become a serious crisis for the nation with the number of cases still on the rise. Recently, Alia Bhatt and Ranbir received a heart-breaking news as their favourite servers at the Taj Mahal hotel's restaurant Wasabi passed away after his combat with COVID 19. Reportedly some time back, a picture of Alia Bhatt and Ranbir Kapoor with Ronald D'Mello had also been going viral on the social media.

However, after the sad news, Alia Bhatt took to her social media to share the beautiful picture of herself and Ranbir Kapoor with Ronald D'Mello along with an emotional message. The Highway actor wrote in the caption that she is heartbroken with the unfortunate demise of Ronald D'Mello. Alia Bhatt was also all praises for Ronald D'Mello and called him one of the kindest and warmest individuals along with the one who was truly the best in his field.

Alia Bhatt shares her experience with Ronald D'Mello in her post

Check out Alia Bhatt and Ranbir Kapoor's picture with Ronald D'Mello along with her heartfelt message.

Also Read: Home Décor Inspiration From The Homes Of Celebrities Like Alia Bhatt And Kylie Jenner 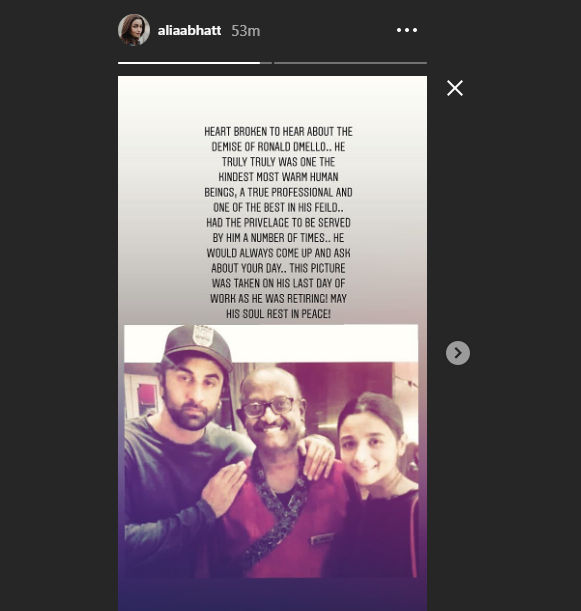 The heart-breaking news of Ronald D'Mello's demise was also shared by well-known restauranteur and patron, Gauri Devidayal. Recently, Alia Bhatt and Ranbir Kapoor joined hands with stars like Amitabh Bachchan, Priyanka Chopra along with many members of the South film industry to star in a short film, Family for raising awareness against COVID 19 amidst their fans. The COVID-19 lockdown has also been extended by Prime Minister Narendra Modi till May 3, 2020.

PEOPLE HAVE PLEDGED SO FAR
LATEST NEWS
View all
25 mins ago
Deepika Padukone's sketch drawn on paper by fan is all things adorable
13 hours ago
Unseen pic of the day: Sara Ali Khan is busy with her phone as Imtiaz Ali looks on
49 mins ago
Salman Khan with Aishwarya Rai or Jacqueline Fernandez, chemistry that impressed fans
31 mins ago
Rani Mukerji's movie songs sung by Sunidhi Chauhan; see full list
1 hour ago
Before 'SOTY', Alia Bhatt made her debut aschild artist with this film