The trailer of the Netflix film was released by makers on Tuesday through their social media handles. The film marks the screen debut for Akansha Ranjan Kapoor.

Anyone even remotely familiar with Alia Bhatt’s personal life would know that her best friend is Akansha Ranjan. With the release of the trailer of Netflix's newest offering Guilty, which is the digital platform debut for Akansha, her best friend and actor Alia Bhatt lauded the actors through her Instagram stories. She seemed especially bowled over by her best friend's performance as she wrote in the caption, "Whatta trailer!!!!! And look at my best friend!!!!!!" 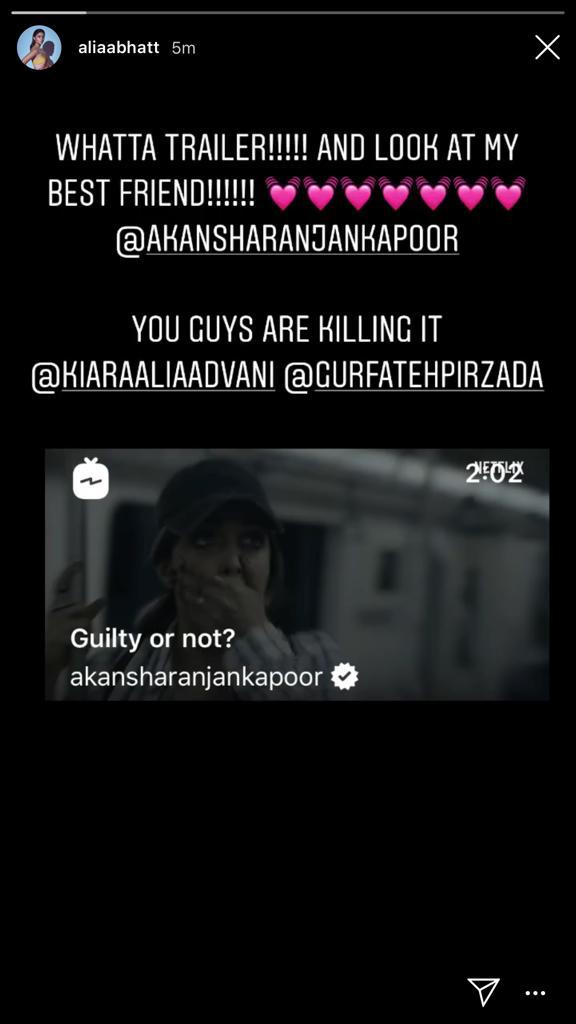 Read | Alia Bhatt-Akansha Ranjan were pulled over by cops once, duo reveals as they take ‘Best Friend Test’

The Guilty trailer explores the different versions of truth that emerge when a small-town girl accuses her college heartthrob of rape. Seen through the eyes of his musician girlfriend, this story will make the audience question who is truly 'guilty' in such circumstances. Akansha Ranjan Kapoor plays the role of the rape survivor in the film whereas Taher Shabbir plays the role of the alleged perpetrator VJ.

Netflix’s Guilty is headlined by and showcases Good Newwz actor Kiara Advani in a brand new avatar. The trailer was quick to spark reactions as it dropped on the Internet. The Lust Stories actor plays the role of a college student who belongs to an elite family in Delhi and is a songwriter for a college rock band.

Take a look at the trailer here:

What's next for Alia Bhatt?

Alia Bhatt was last seen in Abhishek Varman's period drama Kalank in 2019 which was a Box-Office failure. The actor will be seen in Sadak 2, helmed by her father and veteran director Mahesh Bhatt. Alia is currently filming for Sanjay Leela Bhansali's magnum opus titled Gangubai Kathiawadi which is scheduled to release in September this year. The actor's much-anticipated film of the year is the Ayan Mukerji directorial Brahmastra which features her alleged beau Ranbir Kapoor and Bollywood megastar Amitabh Bachchan along with her. The movie will release in theatres on December 4, 2020.

Read | Kiara Advani would be 'Guilty' if looks could kill, says Twitterati on her film trailer

PEOPLE HAVE PLEDGED SO FAR
Katrina Kaif knows how to flaunt her perfect jawline in these photos on Instagram
B-town celebs post wishes for choreographer-director Remo D’Souza on his 46th birthday
Prabhas' 'Darling' movie songs his fans should add to their playlist
Vicky Kaushal would have pursued this if not a career in acting | Find out
Mandana Karimi stresses over family being stranded in Iran due to coronavirus
DO NOT MISS
UNITE AND FIGHT CORONA: PM MODI
AIR INDIA SIGNS CONTRACT
WATCH: PREGNANCY Q&AS
JAVADEKAR SLAMS SONIA FOR CRITICISM
'9000 MARKAZ CONTACTS TRACED'
FANS EXCITED FOR KOHLI-KP TALK