Salman Khan's recent song Pyaar Karona which won several praises from his fans, was liked by Alia Bhatt who hailed the star for his efforts on the special song

As soon as Salman Khan released his song Pyaar Karona amid Coronavirus lockdown, it won the hearts of his fans on the internet. The song which won several praises from his fans was also lauded by actress Alia Bhatt who too was in complete awe of Salman for his efforts. The Raazi star took to social media to praise Salman’s song Pyaar Karona.

Alia reposted Salman’s post of his song on her Instagram story and praised the megastar. She appreciated the song and called it ‘lovely.’ Alia shared the post and wrote, “So Lovely @BeingSalmanKhan,” with a clapping emoticon. Not just Alia, Salman Khan’s Tiger Zinda Hai co-star Katrina Kaif too shared Salman’s song on her social media handle. 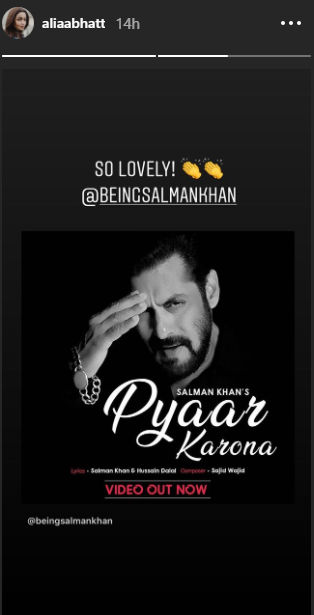 Salman Khan dropped his latest song in a bid to inspire people amid the current Coronavirus pandemic situation around the world and in India. The song is made using minimal resources and is penned down by the star himself and Hussain Dalal. In a recent interview to a leading daily, the actor opened up about the idea behind his new song Pyaar Karona.

Read: Alia Bhatt 'smiles Away To Perfection' As Manish Malhotra Is Busy With A Scissor

Read: Alia Bhatt Urges Fans To 'unite To Ignite Fire' In The Homes Of Needy Amid COVID-19 Crisis

In the interview, he was asked about the thought behind making Pyaar Karona. The actor who is currently spending his quarantine period in his Panvel farmhouse replied to the question by saying that the lyrics of this song express exactly what he wants to tell the world during the current situation. Salman Khan has given the message with lyrics, Pyaar Karona, Madad Karona, Sabr Rakhona (Love everyone, Help everyone and be patient). Some time back, Alia and Salman made headlines where they were supposed to work together for Sanjay Leela Bhansali’s film Inshallah. However, due to some issues, the film was shelved.

Read: From Salman Khan To Jaaved Jaaferi; Here Are Celebs Who Made News Today

PEOPLE HAVE PLEDGED SO FAR
LATEST NEWS
View all
56 mins ago
Nawazuddin-anurag and ajay-rohit: a look at bollywood's power-packed actor-director duos
33 mins ago
'gulabo sitabo' song 'jootam phenk': amitabh, ayushmann all set to take fans on a fun ride
46 mins ago
Ajay devgn is yet to work with these acclaimed directors in bollywood
49 mins ago
Bhuvan bam unfolds ground reality, shares emotional video amid nationwide lockdown
54 mins ago
Varun dhawan enjoys yoga session at home amid quarantine, see pic