Alia Bhatt is friends really good friends with stars like Katrina Kaif, Ayan Mukerji, and Varun Dhawan. Take a look at their friendship here for yourself.

Alia Bhatt has been busy shooting movies like Brahmastra, Sadak 2, and Gangubai Kathiyawadi. She has been in the industry for about 6 years now. She has worked with big names like Shah Rukh Khan, Ranveer Singh, and Varun Dhawan. She has films where she is the main protagonist of the story. Although she is very busy, Alia has kept and very good balance in between her work life and personal life. She is seen spending time with her friends and is seen shooting the next day. Making the most of a situation is what Alia is good seems to be good at. Here is a list of Alia Bhatt’s friends who she seems to be very close too.

This friendship seems odd, as Katrina Kaif is the ex-girlfriend of Ranbir Kapoor and Alia is currently seeing Ranbir. It was reported that Katrina and Alia have been friends way before Alia started seeing Ranbir. It was also reported that the duo shares a good bond and that Alia dating Ranbir Kapoor has not affected Katrina Kaif. Katrina is seen commenting on Alia’s posts too. Check the picture below. 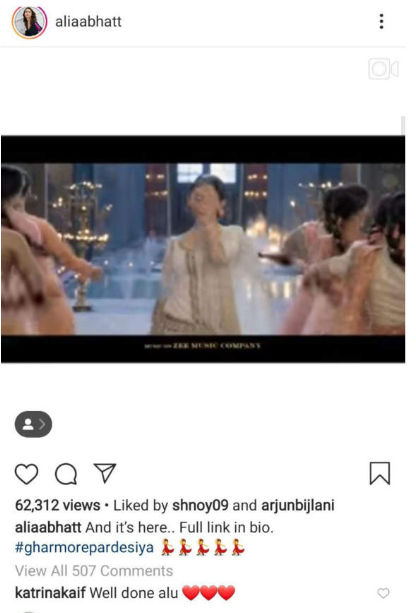 The director of her upcoming film Brahmastra is one of the best friends of Alia Bhatt. Ayan has been seen with Alia for a long time. Alia’s Instagram is full of pictures of her and Ayan. She was recently also seen taking a vacation with Ayan. We saw Ayan on Alia’s Instagram story where she referred to him as her “sunshine”. Check the latest post of Alia Bhatt where we can see her vacationing with Ayan Mukerji and Ranbir Kapoor.

Varun Dhawan and Alia Bhatt debut in Bollywood together in the movie, Student of The Year. They both have done 5 movies together in their career and most of the films have been appreciated by fans. Their off-screen bond is so good that they get cast opposite each other often and we can see both of them getting the best of each other out on the screen.

PEOPLE HAVE PLEDGED SO FAR
LATEST NEWS
View all
8 hours ago
'Tubelight' shooting locations: From a quaint town to the mesmerising beauty of Ladakh
10 hours ago
Salman Khan cleans Panvel farmhouse on World Environment Day, uses hashtag 'Swachh Bharat'
10 hours ago
'Housefull 4' shooting locations: Was the grand Sitamgarh palace real or constructed?
9 hours ago
'Choked' review: A sincere representation that hits the right chords
12 hours ago
Masaba Gupta reveals how she balances work schedule and personal life amid lockdown