Legendary actor Amitabh Bachchan was all praise for his late co-star, Pran on his 100th birth anniversary. Amitabh Bachchan shared a few photos of them together and also penned down a beautiful message.

Amitabh Bachchan recently posted a tweet where he went on to share a few stills from their movie. Looking at Amitabh’s tweet it is very evident that he had a lot of respect for Pran. The picture range from the two working in Zanjeer to Don and then on Pran’s book launch event. Check out Amitabh Bachchan’s tweet for Pran here below.

Along with the post, Amitabh Bachchan also praised Pran for his extraordinary work in the film fraternity. He also went on to say that Pran was a very sophisticated and dignified person. He also said that nothing could compare to the kind of roles he played on-screen. Read Amitabh Bachchan’s heartwarming note for Pran. 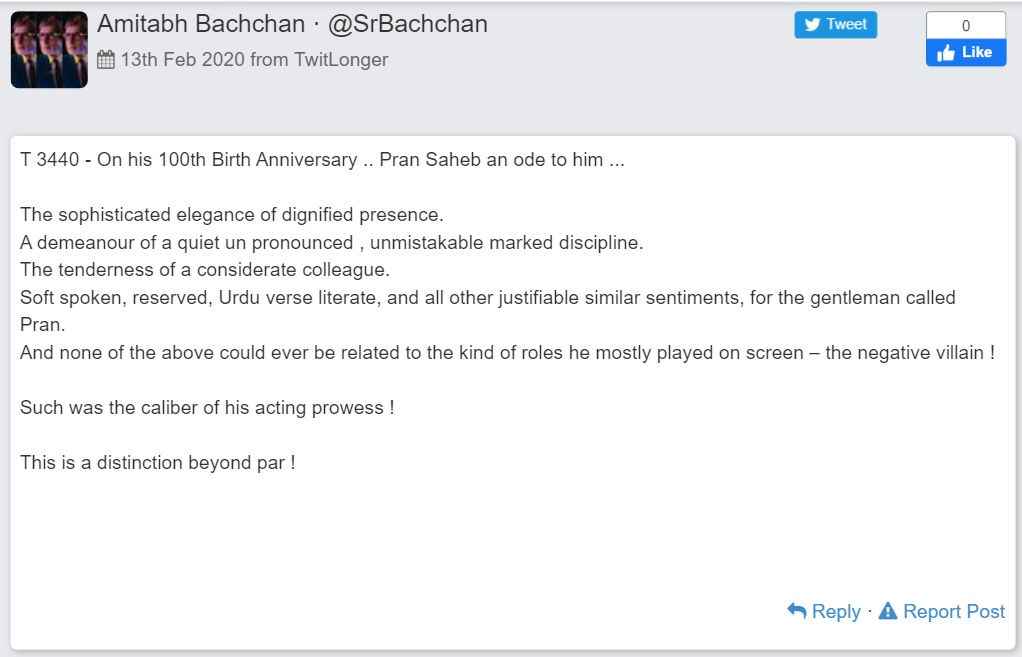 Amitabh Bachchan and Pran worked together in several films. Their most popular films such as Zanjeer, Majboor, Dostana, Amar Akbar Anthony, Don, Jaadugar, Kaalia, Nastik, Naseeb, Sharaabi, and Toofan to name a few.

After Amitabh Bachchan tweet, netizens also reacted to Pran’s 100th Birth anniversary. Many shared heartfelt messages, while the others went on expressing his absence and how the industry has lost such an incredible actor. Check out a few tweets from fans below.

PRAN saab great actor all time .. so true even one loved him so much that no body kept his sons name PRAN https://t.co/QySfkjTN0i

Remembering Pran,the best villain and a great person on his birth anniversary. I remember when cricketer Kapil Dev was to be sent to Australia for training, he offered to finance that trip. pic.twitter.com/QXCyDKoTZd

Pran Sahab is every one's "Pran"

Also read | Amitabh Bachchan's Old Films That Are Gold To Watch On Netflix; From 'Don' To 'Kaalia'

Remembering one of Hindi cinema's most iconic actors, #Pran Saab, on his 100th birth anniversary(12/02)

While he was feared as a villain on screen, he was a gentleman in real life. pic.twitter.com/jhaig3O8Kf

PEOPLE HAVE PLEDGED SO FAR
Kubbra Sait posts about Vivanta by Taj calling her 'Mr Saint'; sparks hilarious comments
Urvashi Rautela has THIS advice for everybody who has a thing for beaches
Soni Razdan highlights flak, praise for PM's '9 mins' appeal, says 'nothing wrong with it'
Vicky Kaushal reveals his guilty pleasure during "Ask Me Anything"
Kriti Sanon's movies that have crossed 100 crore mark at Box Office
DO NOT MISS
'CHINESE VIRUS GO BACK': BJP MLA
INDIA SHINES AGAINST CORONAVIRUS
KANIKA KAPOOR DISCHARGED
RAMAYAN: DID DD TROLL SONAKSHI?
TIGERS TESTED POSITIVE IN NYC ZOO
BIBEK DEBROY HITS BACK AT CRITICS