Amitabh Bachchan, who enjoys a massive fan following on social media platforms, took to his Instagram handle to recall Abhishek's reaction to his 1985 portrait.

Actor Amitabh Bachchan is quite active on social media platforms as he often shares throwback pictures, cherishing the bygone times. Recently, the actor gave fans a glimpse from his 1985 Paris trip with a picture, which features a famous painter painting Amitabh Bachchan’s portrait. However, with the picture shared, Amitabh Bachchan cleared that little Abhishek was not very affirmative about the portrait, as he thought that it ‘had gone all wrong’. Take a look at the picture:

As seen in the picture shared, Amitabh can be seen sitting, while the painter sketches the actor's portrait. With the picture, Amitabh wrote: "Paris, Montmartre, 1985 .. the famous bohemian courtyard of artists and painters .. made famous by the legendary artist Toulouse Lautrec .. a film made on him ‘Moulin Rouge’ that starred the incredible actor José Ferrer .. and later Moulin Rouge made by Baz Luhrmann .. and of course 'Calcuttaites' would dwell on the famous night club Moulin Rouge, on Prak Street. our nightly hang out during 1962 - 1968 .. and the band of Louis Banks and singer Pam Crane .. aaahhhh .. those were the days my friend. Back to the picture ðŸ˜€ .. Abhishek thinking that my portrait being drawn is going all wrong ðŸ¤£ðŸ¤£ðŸ¤£ðŸ¤£ðŸ¤£". Amitabh Bachchan's daughter, Shweta Bachchan wrote: "Hahaha! Look at AB's face!". 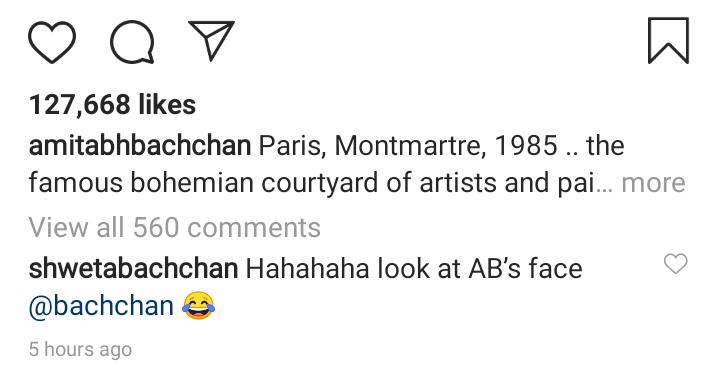 Starring Amitabh and Ayushmann Khurrana in the leading roles, Gulabo Sitabo follows the story of two men, who get caught up in a game of upmanship, as each one starts attracting other members to their clan with an agenda of his own. It's helmed by Shoojit Sircar. Gulabo Sitabo released on Amazon Prime Videos on June 12, 2020.

Meanwhile, Amitabh will be next seen with daughter-in-law Aishwarya Rai Bachchan in Mani Ratnam's upcoming historical flick, Ponniyin Selvan. The makers of Ponniyin Selvan have left no stone unturned for the movie's success as the much-anticipated period drama has an ensemble cast consisting of Aishwarya Rai Bachchan, Nayanthara, Karthi, Amala Paul, Anushka Shetty, Jayaram and Keerthi Suresh. Reportedly, the sequences of the movie have been shot in Kerala, Chennai, and the dense jungles of Thailand.

The actor will also be seen with Alia Bhatt, Ranbir Kapoor, and Nagarjuna in the much-anticipated, Brahmastra. Starring Alia Bhatt, Ranbir Kapoor, and Amitabh in the leading roles, Brahmastra is reportedly a three-part film and the first part is expected to hit the theatres in 2020. Directed by Ayan Mukerji, the makers of Brahmastra have also managed to rope in South Indian actor Nagarjuna Akkineni and Mouni Roy in a prominent role. The movie is bankrolled by Karan Johar.