In a blog entry for January 22, Amitabh Bachchan wrote: "Another death in the family, that's 2 within 2 days, other than Ritu ji’s passing, won't communicate."

In his blog entry for January 22, Bollywood actor Amitabh Bachchan wrote, "Another death in the family .. thats 2 within 2 days .. other than Ritu ji’s passing .. will not communicate." While further details are awaited, Amitabh Bachchan delivered an emotional speech at Ritu Nanda's prayer meet that left everyone teary-eyed, including Shweta Bachchan and Jaya Bachchan.

repost from @ankitbatramusic Condolence Meet Part1: An ode to Ritu Nanda ji, the entrepreneur daughter of the legend Raj Kapoor, mother in law of Shweta Bachchan Nanda. Words are not enough to pay tribute to this dynamic lady. Heartfelt condolences to the family and prayers for the departed soul. It was overwhelming for me to sing, with moist eyes and heavy Hearts of almost everyone in the gathering, who was present while bidding a farewell to the Legend's daughter. You will always be remembered. "Jeena Yahan Marna Yahan Iske Siva Jaana Kahan" #ritunanda

Fans send in their condolences

Fans of the superstar sent in their condolences after Amitabh made the post. Take a look. 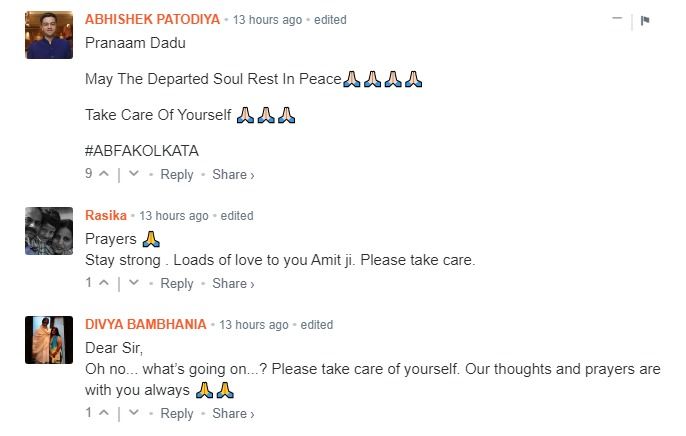 The release of "Chehre", featuring Amitabh Bachchan and Emraan Hashmi, has been postponed to July 17, 2020, the makers announced on Tuesday. "Chehre", a mystery thriller, was earlier scheduled to hit the screens on April 24.

The producers of the film said the release date was changed to accommodate "Gulabo Sitabo", which also stars Bachchan. Directed by Shoojit Sircar, "Gulabo Sitabo" is slated to be released on April 17. The family comedy-drama also stars Ayushmann Khurrana.

PEOPLE HAVE PLEDGED SO FAR
Riteish Deshmukh and wife Genelia wish Ajay Devgn with a hilarious TikTok video; watch
Kangana Ranaut explains why Lord Ram is the "most important icon of our civilization"
Sara Ali Khan looks cute as a button in braces in this throwback pic with dad and brother
Neena Gupta shares how to easily get wavy hair without going to a beauty salon
Arjun Kapoor asks fans to de-clutter their life and Instagram
DO NOT MISS
UNITE AND FIGHT CORONA: PM MODI
AIR INDIA SIGNS CONTRACT
MAHARASHTRA COVID-19 TALLY
24-HOUR CURFEW IN MECCA & MEDINA
'9000 MARKAZ CONTACTS TRACED'
FANS EXCITED FOR KOHLI-KP TALK