Bollywood actor Sonam Kapoor shared a series of photos through Instagram as she reminisced her photoshoot and giving them each one a hilarious lockdown twist.

Bollywood actor Sonam Kapoor has been under self-quarantine with her husband Anand Ahuja at her in-laws' home in Delhi. She has kept her fans and followers entertained with her homebound activities during the lockdown through updates on her social media handle. On Monday, she shared a series of glamorous throwback photos from a photoshoot and broke the internet with her sense of style and her fashion game on point.

While she captioned every post revealing her quirky and funny thoughts while under lockdown and giving her fans a good laugh, her husband Anand Ahuja's hilarious comments on every post totally stole the show.

She shared another one of her looks where she can be seen posing on a golden coloured chair with an ensemble that camouflaged with it. She called it, "Quarantine look 2 ðŸ˜‚" and that left her husband Anand Ahuja in splits. 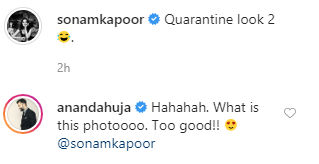 Another picture shared by Sonam featured her lying down on a couch in a red dress with a phone receiver in her hand. She captioned it, "Always on the ðŸ“ž" while Anand posted a hilarious response in the comments.

Sonam Kapoor shared yet another picture clicked from the top angle as she lay on the bed dressed in a sultry black dress. She gave it a hilarious caption, "Pjs in bed? Not me... ðŸ˜‚". Anand Ahuja hilariously trolled her through his comment in an epic manner for her caption. 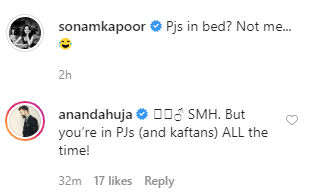 She shared another post of the golden chair and the matching outfit with a different pose and recalled, "How at home shoots used to look like.. I also really like this outfit.. remind me who this is by?". Anand Ahuja was quick to give his reply. 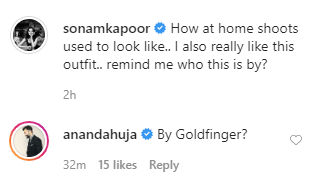 Sonam Kapoor saved the best for the last! Her caption read, "This is me being casual and nonchalant. Obviously these are throwback.. please tag the credits guys I don’t remember.." and her husband's comment on the post is all things love. 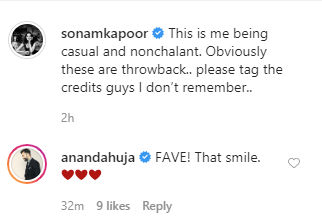 The actor was last seen in the 2019 film The Zoya Factor directed by Abhishek Sharma. Sonam Kapoor is slated to feature in the Hindi remake of the 2011 Korean film Blind opposite Chhapaak actor Vikrant Massey. The film is reportedly an action-drama and will mark the directorial debut of Sujoy Ghosh's assistant Shome Makhija.