Sonam Kapoor expresses her concern over Anand Ahuja's choice of workout music as it is not a usual one. Have a look at what she had to say through Instagram.

Sonam Kapoor recently uploaded a video from her gym where her exhausted husband, Anand Ahuja, could be seen resting. In the video, she can be seen showing people how Anand Ahuja is just done with his workout routine. She can also be heard telling the viewers that Anand Ahuja does not have a regular taste when it comes to workout music.

Sonam Kapoor recently took to Instagram to share that she finds her husband Anand Ahuja’s taste in workout music unusual. In the video posted, the actor can be seen shooting a video in the gym that is there in their apartment. Anand Ahuja can be seen collapsed on a blue workout mat after a hectic workout routine. Sonam has captured the video to show her followers that Anand Ahuja listens to classical music while he is sweating it out. She can also be heard asking her husband in the background what is going on. Anand Ahuja simply smiles at the camera as he is taken by surprise. In the caption added with the video, Sonam Kapoor has reaffirmed the audience that her husband works out to this kind of music. Have a look at the snip from the story here. 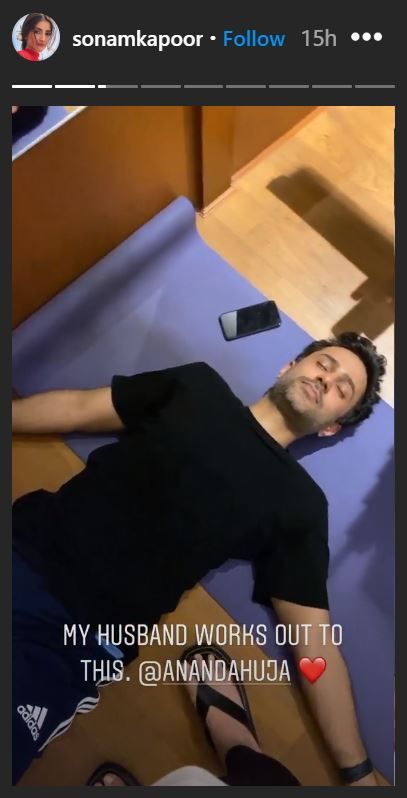 PEOPLE HAVE PLEDGED SO FAR
LATEST NEWS
View all
39 mins ago
Prabhas and other actors whose hard work, dedication for their roles paid off wonderfully
2 hours ago
Bhumi pednekar's movies helmed by first-time directors; check out the list
1 hour ago
Twinkle khanna lives 'proud mom moment' with chocolate cake; calls son 'future baker'
26 mins ago
Shoojit sircar says no one recognised amitabh bachchan during 'gulabo sitabo' shooting
1 hour ago
Nushrat bharucha's throwback pics from her friend's wedding is every girl-squad's dream