Ananya Panday, along with dad Chunky, mom Bhavana, and sister Rysa, enjoyed a blissful time at the Gateway of India. The family also enjoyed dinner in Mumbai 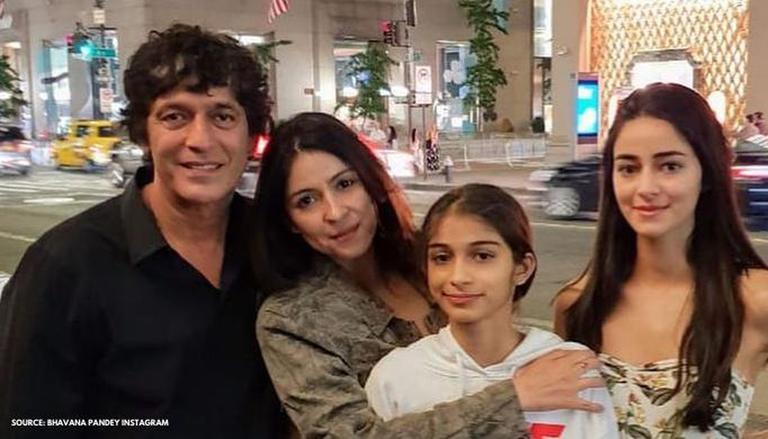 On Monday night, January 4, Ananya Panday stepped out in the city with her parents Chunky Panday, Bhavana Pandey and sister, Rysa after she returned from her vacation in the Maldives. The family of four spent some quality time at the Gateway of India and also enjoyed dinner at Wasabi By Morimoto, Mumbai. Ananya, Chunky and Bhavana shared glimpses from their family outing on their respective social media handles.

While Ananya could be seen donning an animal print skirt with a white tee, her sister sported a casual outfit. Sharing the family portrait, she wrote, "twentytwentyfun". Bhavana Pandey shared the same photo on Instagram and dropped hearts as a part of her caption. Soon, Ananya's Fighter movie producer Charmme Kaur replied to the post with hearts and awestruck emoticons. More so, Madhoo Shah, Neelam Kothari Soni, Deanne Panday, among others also dropped endearing comments.

Meanwhile, Chunky Panday gave a peek into their family dinner. "All my Girls," he wrote in his caption. In no time, Kanika Kapoor and Sikandar Kher commented on the post. Take a look at all the photos shared by Ananya and her family.

Ananya's day out with family in Mumbai

Ananya Panday jetted off for a week-long vacation in the Maldives with Ishaan Khatter. She took to Instagram to share many pictures of herself from the trip. In another post, the Pati Patni Aur Woh star was seen posing in the pool. She opted for a sunflower-themed bikini and complimented her look with flashy sunglasses. When she bid adieu to the place, she shared another photo and Alia Bhatt was quick to notice her tan. "Progressively becoming the real me," Panday wrote in one of her captions. Ananya Panday's photos from her holiday went viral in no time.

On the work front, Ananya was last seen in Khaali Peeli, alongside Ishaan Khatter. The film released digitally and is helmed by Maqbool Khan. She is now gearing up for her upcoming Pan-India, movie, Fighter, which marks the Bollywood debut of Vijay Deverakonda. Directed by Puri Jagannadh, Fighter is said to be based on the life of a boxer. More so, she is also roped in for Shakun Batra's yet-to-be-titled film, alongside Siddhant Chaturvedi.

WE RECOMMEND
Ananya Panday sizzles in her latest picture reminiscing her Maldives trip
Ananya Panday's photo with sister and father is cuteness overload; fans call her a doll
Tinder asks, '2021 will be epic because...?' Ananya Panday has a witty answer
Ananya Panday's Instagram with Astro indicates 'someone has been naughtier this year'
Ananya Panday says 'Going to get trolled anyway' on fashion, focuses on being 'happy'