Ananya Panday is a proud sister as she shared a photo of her younger sister Rysa through her Instagram stories earlier on Sunday. Rysa Panday can be seen in a runner's outfit holding a medal in her hand which she has apparently won for running the 10k marathon on Sunday morning. Ananya Panday has shared her mother Bhavana Panday's Instagram post which had the caption, "So proud of you my baby girl !!! Ran for @worldforallanimaladoptions . @tatamummarathon #10k ♥️♥️😘😘👏👏 @rysapanday" 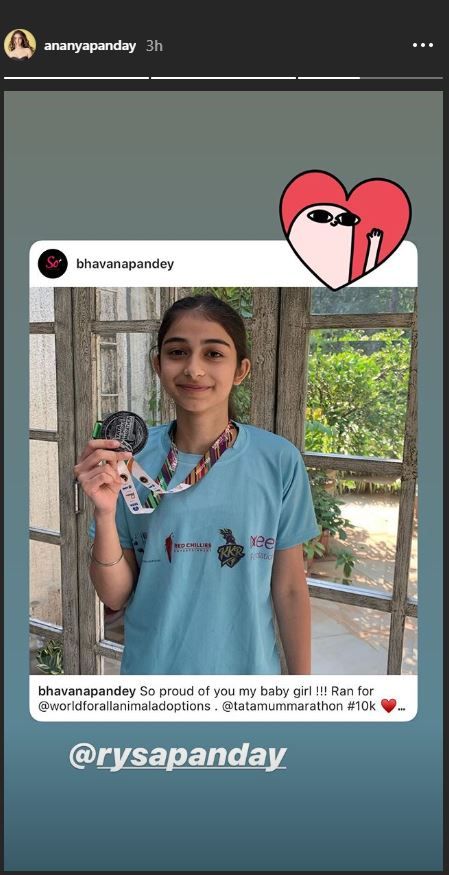 Ananya Panday is currently shooting for his next film, Khaali Peeli, directed by debutante Maqbool Khan. The film also stars Ishaan Khatter of Dhadak fame in a pivotal role. Fans have been excited ever since the project was announced primarily due to the fresh pairing of Khatter and Panday. The film will have a June 2020 release.

The first look of the Maqbool Khan directorial was released on her official Instagram handle earlier in January. In the picture, Ishaan Khatter and Ananya Panday can be seen in a kaali peeli (black and yellow) taxi. She can be seen dressed in traditional attire in the picture.

Have a look at the first look of Khaali Peeli here:

Ananya Panday made her Bollywood debut with Karan Johar’s teen drama flick, Student Of The Year 2. She quickly became a style icon for fans across the country. She is currently riding high on the success of her last film, Pati Patni Aur Woh. Apart from Khaali Peeli, Ananya Panday will also be seen in Shakun Batra’s next untitled film. The film is a relationship drama. It also stars Deepika Padukone and Sidhant Chaturvedi along with Panday. It is expected to release in early 2021.