Ananya Panday, on the occasion of Jackie Shroff's birthday, took to her Instagram account and wished him a very happy birthday. Read on to know more.

The actor is looked up to by many stars in the film industry and has a loyal fanbase. On the occasion of Jackie Shroff's birthday, many Bollywood celebrities took to their social media accounts to wish him Happy Birthday. Among those celebrities is Bollywood newcomer, Ananya Panday. On Jackie Shroff's birthday, Ananya Panday posted a picture of herself alongside Jackie Shroff and captioned it saying, "Happy birthday to my favourite-est rockstar!!"  She even tagged him in the story. Check out the picture below. 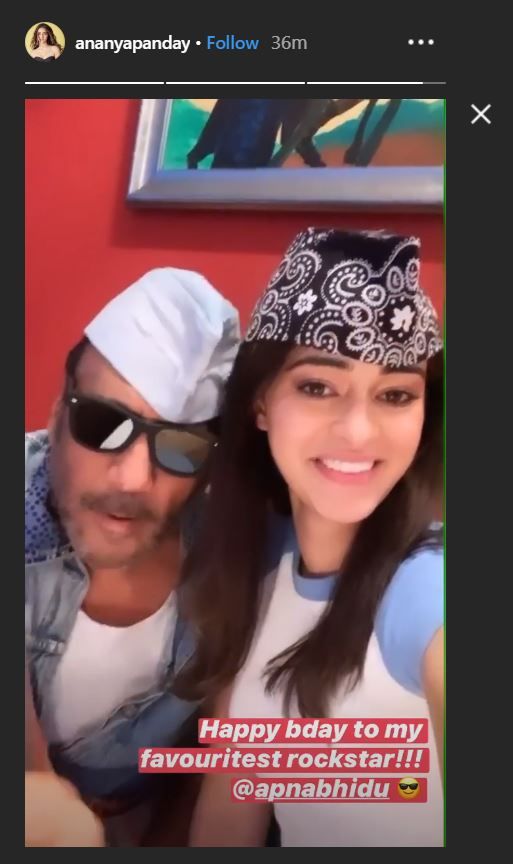 In the post, Ananya Panday was seen posing with her "favourite rockstar", Jackie Shroff. Ananya Panday started her Bollywood career opposite Jackie Shroff's son, Tiger Shroff. The two were seen together in the film, Student Of The Year 2. In the picture posted by Ananya, she was seen sporting a blue and white round neck t-shirt and left her hair open. She can be seen wearing no makeup in the picture. Alongside her, Jacki Shroff is seen wearing a white round neck t-shirt with a blue denim shirt. He is wearing a pair of sunglasses.

Ananya Panday recently saw the massive success of her latest release, Pati Patni Aur Woh. The movie was a comedy and was received well by critics and audiences. Ananya has a few movies lined up her way, including Khaali Peeli where she will be sharing the screen with Ishaan Khattar.