Read further and take a look at Angad Bedi's adorable reel video with his daughter Mehr Dhupia Bedi. Sharing it on Instagram, he calls it 'best time ever spent'

Angad Bedi has been often spotted entertaining his fans and followers with adorable pics and videos of his daughter Mehr. On September 15, the actor took to his Instagram handle and shared a reel video of him playing with his little munchkin. Sharing the video, Angad Bedi wrote, "Best time spent ever is with her". Take a look at Angad Bedi's Instagram video with Mehr Dhupia Bedi.

Best time spent ever is with her... Mehr!!! #daddysgirl #daddyslittlegirl â˜ï¸ðŸ˜ðŸ˜

In this Instagram video, Mehr and Angad can be seen goofing around. She tries to climb on the latter's back. Angad also holds and tries to pick her up. Likely, momma Neha Dhupia has recorded the video. Angad Bedi added Maroon 5's song Girls Like You in this video. Mehr can be spotted in a lovable nightdress. She wore a polka-dotted outfit, with her hair tied in a cute little blue ribbon. Angad Bedi's caption simply read, "Best time spent ever is with her... Mehr!!! #daddysgirl #daddyslittlegirl â˜ï¸ðŸ˜ðŸ˜".

Fans and followers were quick to share their reaction on Angad Bedi's adorable video with Mehr. Several netizens dropped heart and kiss emojis in the comment section. Actor Dia Mirza also wrote, "Mehr ðŸ˜". One of the Instagram users commented, "Cute little onesie, cute hair tie and cutest baby doll in it. Bless her heartðŸ’–". Another fan wrote, "I have a new nickname for her! Cutiepops! ðŸ˜ðŸ˜ @angadbedi". Check out more fans' reactions below. 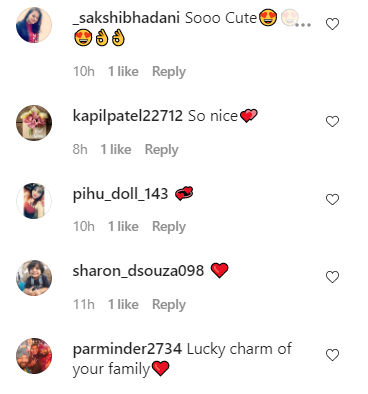 The Gunjan Saxena: The Kargil Girl actor is often snapped by paps in the city as he takes strolls with his daughter. A few days back, the actor shared a reel on his Instagram account, while enjoying a stroll around the city, with Mehr. The video was filmed in the nearest park to their house by Neha Dhupia. Mehr Dhupia Bedi can be seen wearing a white tee that says 'No Filter MDB'. Check out his daughter's latest 'Dhakad' video below: