Angad Bedi took to his Instagram and shares 'Soorma' edit video made by Diljit Dosanjh's fan page. In the caption, he extended his gratitude to the fan page.

On January 12, 2021, Angad Bedi took to his Instagram handle and shared a monochrome video of scenes from his sports film Soorma. The video features Angad and Punjabi singer Diljit Dosanjh. Angad and Diljit can be seen training together and playing hockey. While sharing the video, Angad informed that the video is created by Diljit Dosanjh’s fan and that he loves it.

In the monochrome video, Angad and Diljit sported their athlete look as they portrayed hockey players in the biographical film. The video displays the relation between the duo and their deep affection towards each other. Angad captioned the video, “Loved the edit!!! @diljitdosanjh Dosanjhwala check this out!!! ‘#soorma’ thank you @diljitdosanjhfan_ for this” with several clapping hands emoticon.

Also read: Diljit Dosanjh's Love For Cars Is Evident In These Instagram Posts; Take A Look

Diljit commented on the post, “Bhaji” with a hugging face and praying hand emoticon. The fan page @diljitdosanjhfan_, who created the video too expressed gratitude. They wrote, “Thank you so much @angadbedi paji” with a heart-eyed face, hugging face and monkey face emoticon. A fan commented, “Awesome sir and I m big fan of u” with several praying hands emoticons. Many of his fans dropped red hearts and fire emoticons. 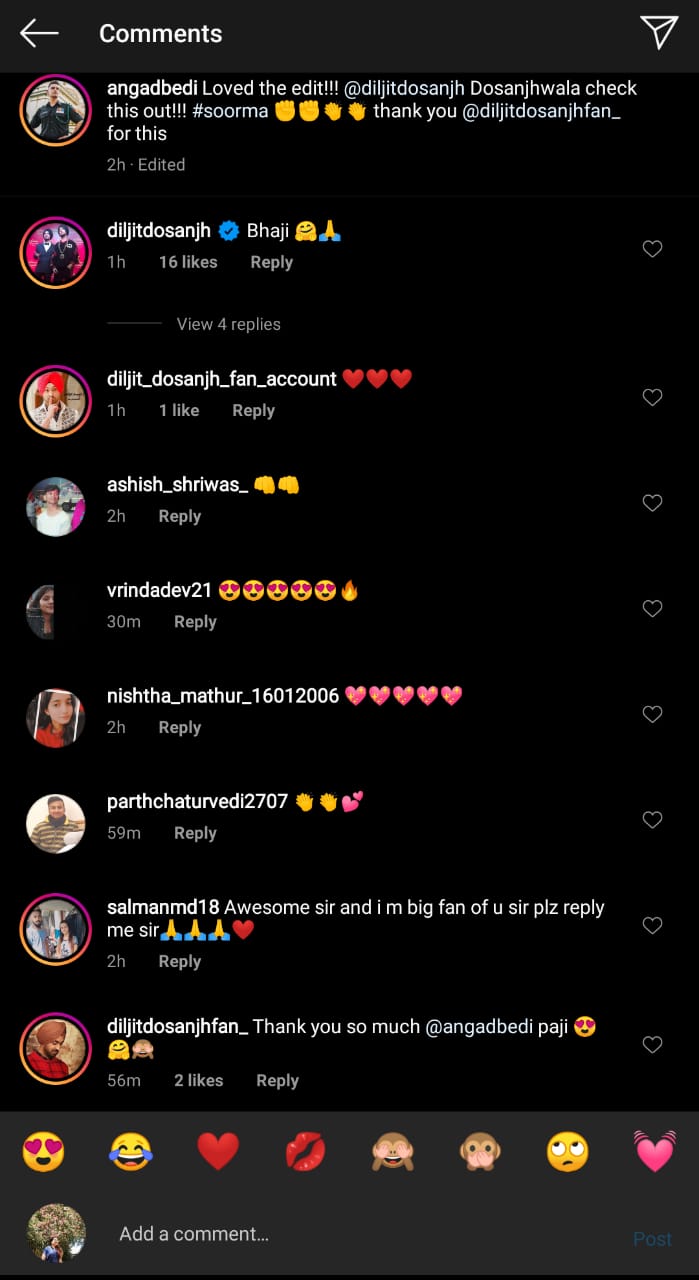 Directed by Shaad Ali, Soorma is a biographical sports drama film which is based on the hockey player Sandeep Singh’s life. Released in July 2018, the film is produced by Sony Pictures Networks India and CS Films. It features Dijit Dosanjh, Angad Bedi and Taapsee Pannu in the essential roles. It received mixed reviews from the critics but emerged as a commercial success on the box office. Angad Bedi played Bikramjeet Singh, Diljit’s brother, who helps him get to the Indian hockey team.

Angad Bedi is popular for his roles in F.A.L.T.U, Pink, Dear Zindagi and Tiger Zinda Hai. He has also appeared in other films such as Rangeelay, Ungli, The Zoya Factor, Gunjan Saxena: The Kargil Girl and more. Angad has also hosted Cook Na Kaho, Extraaa Innings T20 and Emotional Atyachar. Angad married his girlfriend Neha Dhupia in a private ceremony in May 2018. The couple is blessed with a daughter who was born in November 2018.

Also read: Unseen Pic Of The Day: Diljit Dosanjh Looks Cute As A Button In This Childhood Picture