Anil Kapoor recently shared several images on social media, in which he was busy working out. He also revealed his 'state of mind' through the images.

Anil Kapoor is cooped up inside his house during the lockdown just like everyone else. However, the actor still regularly interacts with his fans on social media. Recently, Anil Kapoor shared multiple photos on his Instagram page where he revealed his "state of mind" during the COVID-19 lockdown.

Also Read | Did you know Tabu beatboxed one of the songs in Anil Kapoor's 'Virasat'? Read trivia

The above photos were shared online by Anil Kapoor on his official Instagram page. The photos show off Anil Kapoor's daily workout routine and in the caption, the Mr India actor also asks his fans to 'stay home and stay fit' during the COVID-19 lockdown. Moreover, Anil Kapoor also wrote "State Of Mind" in the caption for his photos, implying that working out was his way of passing time during the pandemic.

Some of the pictures were also tagged with inspirational quotes. One image featured Anil Kapoor lifting weights and was tagged with the quote, "The time you enjoy wasting, is not wasted time."

Another image featured Abraham Lincoln's quote, "The best way to predict your future is to create it." The next image was tagged with, "The journey is just as important as the destination", while the final image read, "In the middle of difficulty lies opportunity.

Many of Anil Kapoor's fans were impressed with his dedication for fitness and workout. However, some fans were more amused by his quotes. Here are some of the comments that fans left behind on the post. 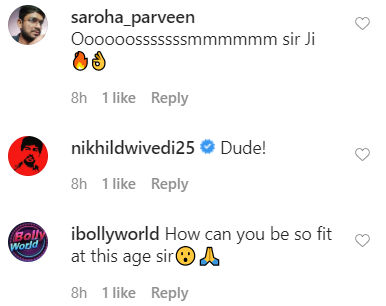 Just a few days ago, Anil Kapoor shared similar workout photos on Instagram. Moreover, even his previous photos had similar inspirational quotes. The actor seems to have completely dedicated himself to his workout routine to stay fit during the COVID-19 lockdown.

PEOPLE HAVE PLEDGED SO FAR
LATEST NEWS
View all
2 mins ago
Tiger Shroff mourns the death of African-American man George Floyd on his social media
2 hours ago
Adah Sharma hopes post-COVID world will be better, claims 'people will be more careful'
17 mins ago
Alaya F posts a clip from her first rehearsal for a song in 'Jawaani Jaaneman', Watch here
1 hour ago
'It has only taken 46 years': Dimple Kapadia cooks for Twinkle Khanna her first meal
29 mins ago
Ali Fazal leaves an adorable comment on Richa Chadha's new profile picture