It's no surprise that with the mention of the Bollywood industry anywhere in the world, some of the iconic actors and their classic dialogues immediately come to mind. When one thinks about Anil Kapoor, the word 'jhakaas!' is at the tip of everyone's tongue along with the signature hook step of his iconic song My Name Is Lakhan from the 1989 film Ram Lakhan. Over the years, these phrases and actions have become a symbol for Anil Kapoor.

Anil Kapoor is one Bollywood star who is known for his social media activity as he updates his Twitter and Instagram handles almost every day, be it for the promotion of his upcoming films or his personal life. Earlier on Wednesday, the actor shared a rather funny photograph through his Instagram stories. His update featured a Tesla car with the number plate that read 'California JHAKHAS' and the actor captioned the story saying that this car was "spotted in the US". 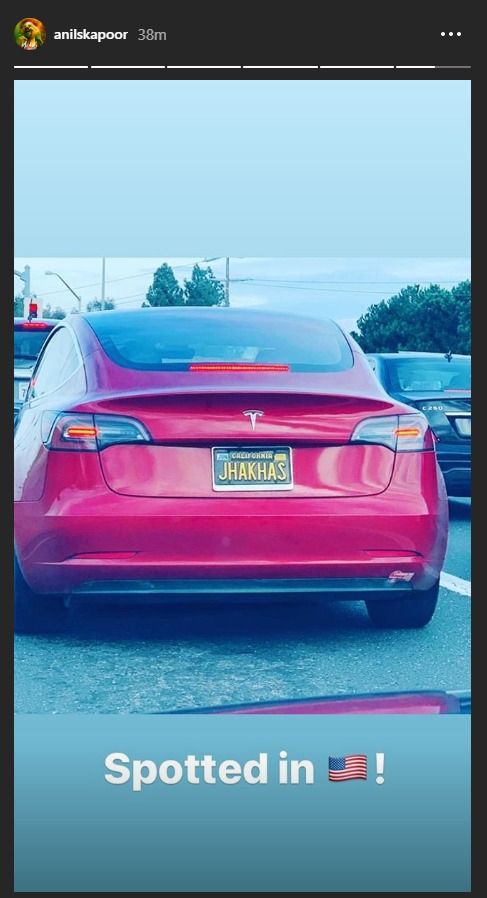 The car seems to belong to one of the thousands of fans that the veteran actor has all over the world. Anil Kapoor is known for his versatility as an actor as well as for his age-defying looks which would put the younger Bollywood actors to shame. He is one of the most recognized Indian film actors in the world with a career that spans 40 years.

What's next for Anil Kapoor?

Anil Kapoor was last seen in the 2019 Anees Bazmee directed comedy film Pagalpanti along with actors John Abraham, Arshad Warsi, Pulkit Samrat and others. The actor is all set to feature in the upcoming crime thriller film Malang directed by Aashiqui 2 fame Mohit Suri in which he will portray the role of a notorious cop Anjaney Agashe. The film also features actors Aditya Roy Kapur, Disha Patani and Kunal Kemmu and is scheduled to release on February 7, 2020. Anil Kapoor has also been signed up for director Karan Johar's period drama Takht which is currently in the pre-production stage.