Anupam Kher recently shared a throwback picture of himself from when he was dressed as Majnu. Anil Kapoor reacts to this post. Check it out here to know more

Anupam Kher who is one of the most loved actors of Bollywood recently took to his Instagram to share a throwback picture from one of his films. In this picture, Anupam was seen in the role of Majnu. Take a look at what Anupam Kher had to share.

After Anupam Kher shared the picture, his dear friend from Bollywood Anil Kapoor took to the comment section of the post. In the post, Anil Kapoor wrote, "Wow anupam ... you are actually looking romantic...". Take a look at it here. 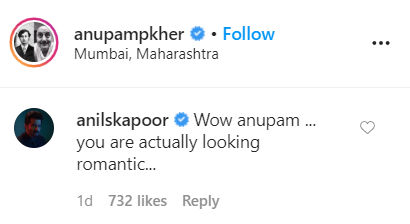 Amid the lockdown, Anupam Kher has managed to keep his fans entertained. He interacts with fans and also shares hilarious memes. The memes he is sharing feature himself and have been getting a lot of love and laughs from his fans.  He has shared a couple of memes; take a look at few of them here.