Anusha Dandekar recently took to her Instagram and posted a photo from 'Four More Shots Please' where she quirkily found similarities in Shibani and her role.

There was reportedly a lot of anticipation and excitement amid fans when the addition of Shibani Dandekar to the Four More Shots Please cast was announced online. The second season of the popular series debuted recently on Amazon Prime Video and is being loved by fans across the net. Whereas, Shibani Dandekar's performance is also being loved and praised immensely by fans. Now, Shibani's sister Anushka Dandekar has taken to her Instagram and shared a quirky similarity between Shibani and her character from Four More Shots Please. 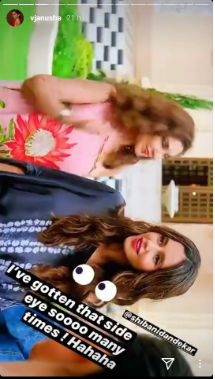 Four More Shots Please revolves around the story fo four friends and their lives as they go through various walks of life. Romance, profession, chasing their ambitions and living in modern-day India are some of the themes explored by the show. It features Kriti Kulhari, Sayani Gupta, Maanvi Gagroo and Gurbani in lead roles with various other actors in the supporting roles. With the second season, a few new additions to the cast like Shibani Dandekar, Samir Kochhar and Prabal Punjabi also made an appearance in Four More Shots Please.