While in a fun chat with Kevin Pietersen on Instagram on Thursday, Royal Challengers Bangalore captain Virat Kohli was checked by his actor wife Anushka Sharma

Keeping a check on her husband's screen time in the most adorable and hilarious way, Bollywood actor Anushka Sharma took to the live chat session between her husband, Indian skipper Virat Kohli, and ex-English captain Kevin Pietersen and asked the former to conclude the chat. The cricketing duo began their conversation at 19:00 IST as both the former Royal Challengers Bangalore (RCB) team-mates came forward to have some fun through social media and also to talk about cricket as well as COVID-19. Anushka reminded Virat that it's time to cut short the fun banter as she said, "chalo chalo dinner time" leaving the fans amused. 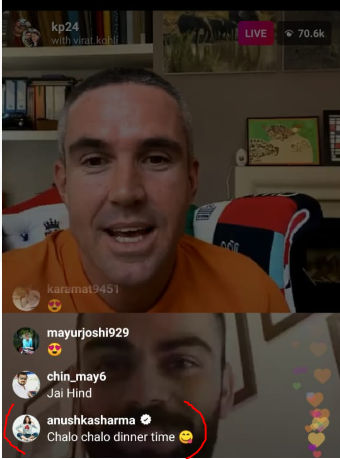 Virat Kohli on his nickname 'Cheeku'

"I got this nickname from a coach in the Ranji Trophy. I used to have big cheeks then. In 2007, I thought I was losing hair. I got my hair cropped and my cheeks and ear stood out. I got the name from a cartoon character. The rabbit in the comic Champak," said Virat Kohli.

Former England cricketer Kevin Pietersen has been using his time in isolation to have conversations with various cricketers around the globe, talking about the game, the ongoing incidents around the world and more. Fans couldn't contain their excitement to see the two powerhouses engage in a talk, especially with Kevin Pietersen admitting that Virat Kohli still teases him for getting him out.

PEOPLE HAVE PLEDGED SO FAR
LATEST NEWS
View all
29 mins ago
Angad bedi poses for a selfie with ayushmann khurrana, aparshakti khurana & yuvraj singh
15 mins ago
Ranveer singh to arjun kapoor; all the actors who have been in awe of anil kapoor
10 mins ago
'amar akbar anthony' clocks in 43 years in bollywood, amitabh bachchan shares anecdote
20 mins ago
'hangover' from 'kick': this making video starring jacqueline fernandez is too cute
58 mins ago
Unseen pic of the day: hrithik roshan’s audition pic from 'mission kashmir' is unmissable