Virat Kohli and Anushka Sharma are one of the most adorable couples in Bollywood. The couple is seen giving relationship goals to their fans time and again.

Virat Kohli and Anushka Sharma are one of the most adorable couples in Bollywood. The couple is seen giving relationship goals and travel goals to their fans time and again along with their endearing social media PDA. Not only that, but they also celebrate each other’s achievements and stand by each other during all the stressful times. ‘Virushka’ as their fans lovingly call them, teach us the real meaning of love and togetherness. Recently, the two made headlines after Anushka shared a picture of her quiet movie night with Virat. In the picture, one can see a screen wherein the movie is playing. Interestingly, both of them can also be seen twinning in white sneakers. Take a look below-

READ: Virat Kohli, MS Dhoni Win MSK Prasad Over With Their Respect For Him 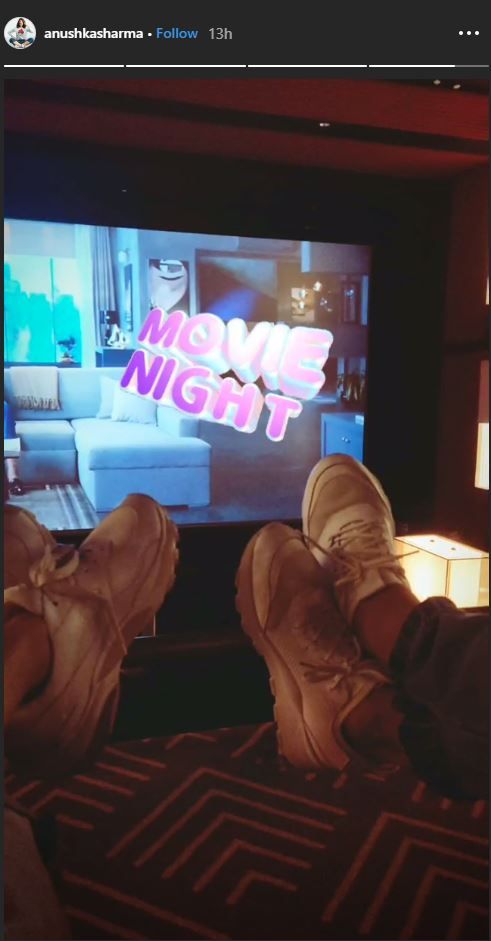 Anushka Sharma was last seen in the film Zero

On the work front, Anushka Sharma was last seen in the movie Zero which was released on December 21, 2018. The movie was unfortunately not critically praised and received a rating of 5.5 by the IMDb. After which she did not appear in any Bollywood film to date. She will reportedly next be seen in a drama movie, titled Priceless. The film will be helmed by Tarun Mansukhani and it will feature Anushka who will be seen sharing the big screen with the Ek Villain actor Sidharth Malhotra. This will also be the first time that Sidharth and Anushka will be seen together on the screen.

READ: Anushka Sharma Brightens Up The Day For Her Fans With Her Latest Photographs

Meanwhile, The couple also embarked on a trip to Bhutan together to ring in Virat’s birthday and shared some lovely pictures from the trip. Virat also recently shared a beautiful picture with his wife which is too beautiful to behold.

READ: Deepika Padukone Vs Anushka Sharma - A Comparison Of Their Careers

PEOPLE HAVE PLEDGED SO FAR
Gautam Gambhir agrees with Virat Kohli, says India owes Sourav Ganguly for overseas form
Virat Kohli, MS Dhoni win MSK Prasad over with their respect for him
Anushka Sharma can't keep calm as she receives Virat Kohli at the airport
Virat Kohli in splits after presenter forgets to hand him trophy; Watch
Virat Kohli-Anushka Sharma 'walking with nothing but love' is what true love is all about
'Tejas' | Kangana Ranaut playing IAF pilot all the more reason to cheer: Abhishek Singhvi
Taapsee Pannu, Madhur Bhandarkar, others react to Permanent Commission for women in Army
Ishaan Khatter likes to perform his own stunts without any cables or harnesses
DO NOT MISS
MHA EXPLAINS BRITISH MP'S DEPORT
ANOTHER JAMIA VIDEO EMERGES
OWAISI: 'FIR AGAINST DELHI COPS'
MASOOD AZHAR GOES 'MISSING'
IPL 2020: MUMBAI INDIANS FIXTURES
THEATRE COMMAND STRUCTURE IN INDIA