The frontline medical staff who are working tirelessly to save the lives of the people, received appreciation from Bollywood star Anushka Sharma.

Amidst the coronavirus pandemic, the doctors are not hesitating to risk their lives to save critically-ill patients. The frontline medical staff who are working tirelessly to save the lives of the people received appreciation from Bollywood star Anushka Sharma. A new incident of a doctor who risked his life to save a COVID-19 patient is receiving appreciations from people all across. Anushka Sharma hailed the doctor for his act of humanity on social media.

Anushka Sharma took to her Instagram story and shared the piece of news with her fans. The PK actress shared the picture and captioned it as "respect" along with clapping emoticons. The incident is from Delhi's AIIMS where a senior resident doctor identified as Zahid Abdul Majeed took off his safety gear to help shift a COVID-19 patient to the Trauma center. As per reports by a local media, Majeed was yet to break his Ramzan fast on May 7 when he got the call to shift the confirmed COVID-19 patient. The patient was initially admitted to the main AIIMS and later shifted to the Trauma Centre designated for treating the COVID-19 patients. 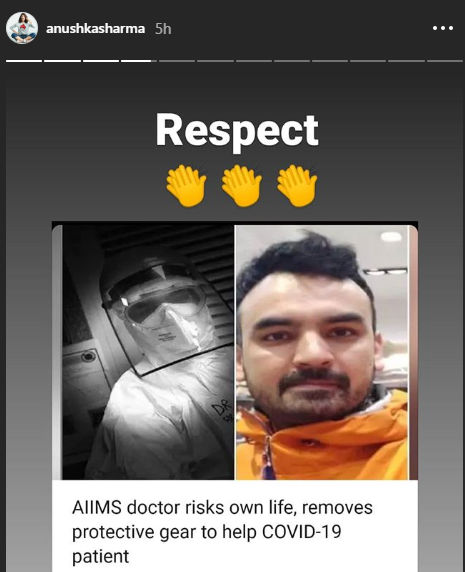 According to reports, as Dr. Majeed reached the ambulance, he found it difficult to ventilate the patient possibly due to malpositioning of the tube placed into the windpipe. The doctor reportedly said that he had to immediately re-intubate as the delay could have proved fatal for the patient. Since the doctor was wearing protective goggles, the visibility was less and it became difficult for him to reinsert the tube. As per reports, the doctor had to remove his safety gear to reintubate the patient keeping in view the critical condition of the patient. According to reports, after the quick treatment, the patient continues to be on a ventilator while Majeed is under quarantine after the exposure.

Read: Anushka Sharma's Critically Acclaimed Movies That You Must Check Out

Read: Anushka Sharma Is A Vigilant Activist Of Climate Change Crisis And Here Are The Proofs