Recently, Anushka Sharma lauded the Supreme court's decision of all women officers being on par with male officers in the Indian army. Check out her IG story.

Recently, India's Supreme Court announced that all women Army officers are now eligible for permanent commissions, allowing them to be in Command roles. It means that all women officers will now be on par with men when it comes to promotions, ranks, benefits, and pensions.

The Supreme Court also ordered the government of India to extend permanent services, which have only been applicable to male officers so far, signalling a move towards gender parity in the traditionally male bastion.

Since the announcement was made public, citizens from across the country have been appreciating the initiative and have hailed the verdict as a "great leap" towards equality in the army. Bollywood actor, Anushka Sharma, who has been quite vocal about her political views, recently shared her opinion on the verdict on her social media platform.

Recently, Anushka Sharma took to her official Instagram handle to share her views on the newly-passed verdict of the Supreme Court, which gives women equal opportunities as men in the Indian Army. Anushka lauded the iconic decision and revealed that with this decision, women Army officers will be able to serve longer tenure periods and will also enjoy higher rankings and promotions in the Indian Army. The actor herself hails from an Army background and appreciated the initiative and congratulated the women officers. 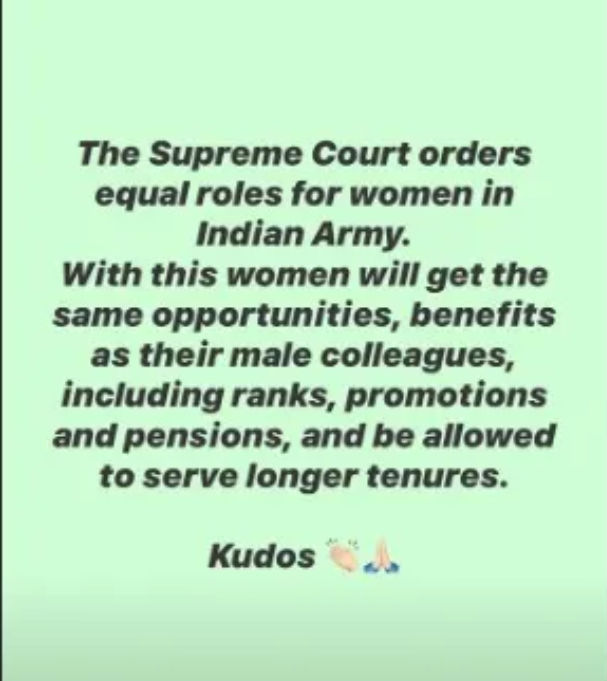 Anushka's connection with the Indian Army

Anushka Sharma has been born and brought up in an Army family, as her father Ajay Kumar Sharma served as a colonel in the Indian Army and has now retired. Speaking about her experiences of being an 'army' kid, she once revealed that the values and the principles of the organisation have taught her discipline and dedication. The actor had also spoken about her family fears during the 1999 Kargil War, which her father Col. Ajay Kumar Sharma had fought in.