Weekly Celeb Roundup: Find Out What Anushka Sharma Has Been Up To This Week

Anushka Sharma's web series, 'Paatal Lok', has been making headlines this week. However, Anushka was also served a legal notice due to hurtful scene in the show

Anushka Sharma had a productive week as her latest Amazon Prime web series, Paatal Lok, made its premiere. She also had some amusing interactions on social media. Here is what Anushka Sharma has been up to during this week (May 17 to May 22).

A few days ago, Anushka Sharma shared an amusing video on social media. She claimed that she spotted a 'dinosaur on the loose'. The video featured Virat Kohli as hilariously walked and acted like a dinosaur. Later, the Nagpur Police's replied to Anushka Sharma's post and asked if she needed a "rescue team".

Should we ask @MahaForest Dept to send a rescue team? https://t.co/gQ6IwmUWoa

After the release of Paatal Lok, Anushka Sharma took to social media to thank the 'good boys' who were in the show. She shared photos of dogs and said that she wanted to help them "live a life of dignity". She also shared a list of organisations that help protect and care for dogs.

The love you have showered on these good boys and girls from #PaatalLok is justðŸ’œðŸ’œ.
Standing for them & helping them live a life of dignity is something I support and continually work towards…& if you’d like to lend your support to them, below is a list of a few organisations.. pic.twitter.com/w2JGP2N6JB

Anushka Sharma's 'Pataal Lok' rated No.1 on IMDb, star thanks fans for their love 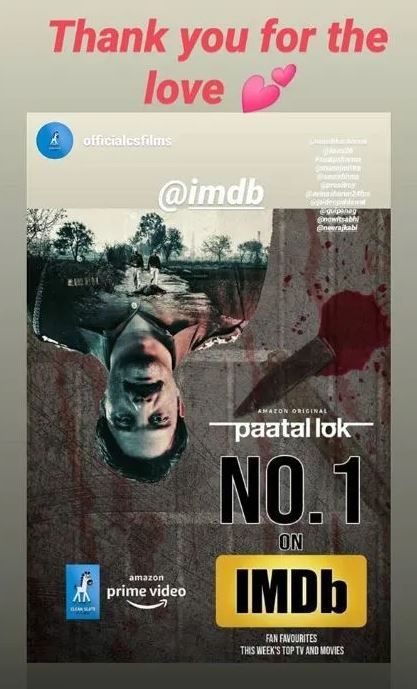 The Lawyers Guild recently served Anushka Sharma a legal notice. According to The Lawyers Guild, Anushka Sharma's Paatal Lok has a castist slur that is hurtful to the Nepali Community. Nepali Communities in India also petitioned the Union Information and Broadcasting Ministry to remove the slur from the show. According to the Gorkha community, the slur is not only hurtful but it also spreads hate during the COVID-19 pandemic.

Appeal to all the General Public!

PEOPLE HAVE PLEDGED SO FAR
LATEST NEWS
View all
7 mins ago
Salman Khan's chemistry with Katrina Kaif and Daisy Shah: Here's a comparison
1 hour ago
Shahid Kapoor to play modern version of Mahabharat’s 'Karna' in Rakeysh Mehra's next?
51 mins ago
Today's Unseen Pic: Farhan Akhtar is ‘carbon copy’ of dad Javed Akhtar; See throwback pic
25 mins ago
Will 'Superman' Cavill & Gal Gadot be perfect if 'Jab We Met' was remade in Hollywood?
52 mins ago
Kabir Khan won't release '83 immediately after lockdown, claims 'comfort must be palpable'