Ranveer Singh took to his Instagram story and gave a great review for Anushka Sharma's Paatal Lok. Check out the post and read to know what he has to say.

Bollywood actor Anushka Sharma wore the producer’s cap for Paatal Lok and made her digital debut on the platform. Paatal Lok has received exceptional reviews from the audiences as well as celebrities. It has been revealed that Paatal Lok was rated number 1 on IMDb as well. Bollywood actor Ranveer Singh has taken to his social media to review the show as well. Check out what he has to say. 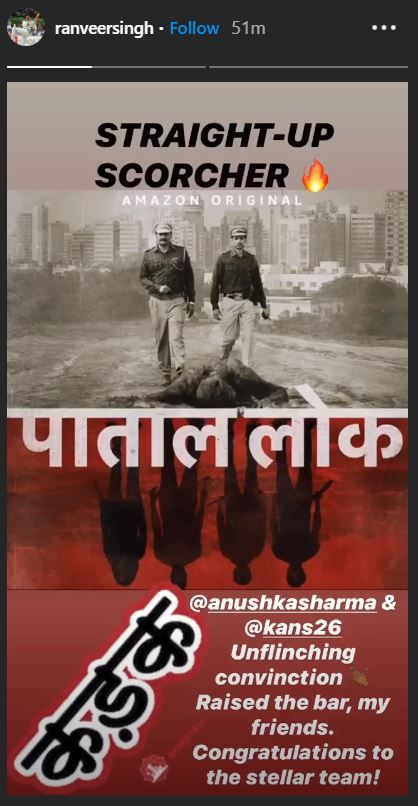 Ranveer Singh revealed that Paatal Lok is ‘straight-up scorcher’ on his Instagram story. He shared a poster of the show and tagged both Anushka Sharma and the executive producer of the show Karnesh Sharma. Ranveer Singh wrote that the show has unflinching conviction. He also added that the Anushka Sharma and Karnesh Sharma have raised the bar with the show.

ALSO READ: Anushka Sharma's 'Pataal Lok' Rated No.1 On IMDb, Star Thanks Fans For Their Love

Ranveer Singh like most Bollywood celebrities has been homebound after the COVID-19 lockdown was announced. While quarantining with his wife Deepika Padukone, the actor seems to be making the most of his time by catching up on shows. On his social media, Ranveer Singh had revealed that he has been spending his time working out and spending quality time at home.

Paatal Lok, based on the book written by Sudip Sharma, is a crime thriller. Sudip Sharma has worked on some of the most well-known films like Udta Punjab and NH10. Paatal Lok is inspired by the ancient realm of Paatal Lok, Dharti, and Swarg. Paatal Lok explores the dark side of immorality. It also intersects with the four states of democracy.

Paatal Lok stars Jaideep Ahlawat, Niharika Lyra Dutt, Neeraj Kabi, and Gul Panag in the lead roles. Actor Anushka Sharma has produced the web series along with others. Prosit Roy and Avinash Sharma have directed the web series, while Sudip Sharma has created it. Paatal Lok has nine episodes and is available for streaming on Amazon Prime Video.