Anushka Sharma recently shared a story on her Instagram story about the couple who owns 'Baba Ka Dhaba'. Take a look at her post and see reactions.

Actor Anushka Sharma recently shared a post by Humans of Bombay on her Instagram story. The post was about an elderly couple who runs a small food shop called Baba Ka Dhaba. Take a look at what Anushka thought and more about the post in the article below: 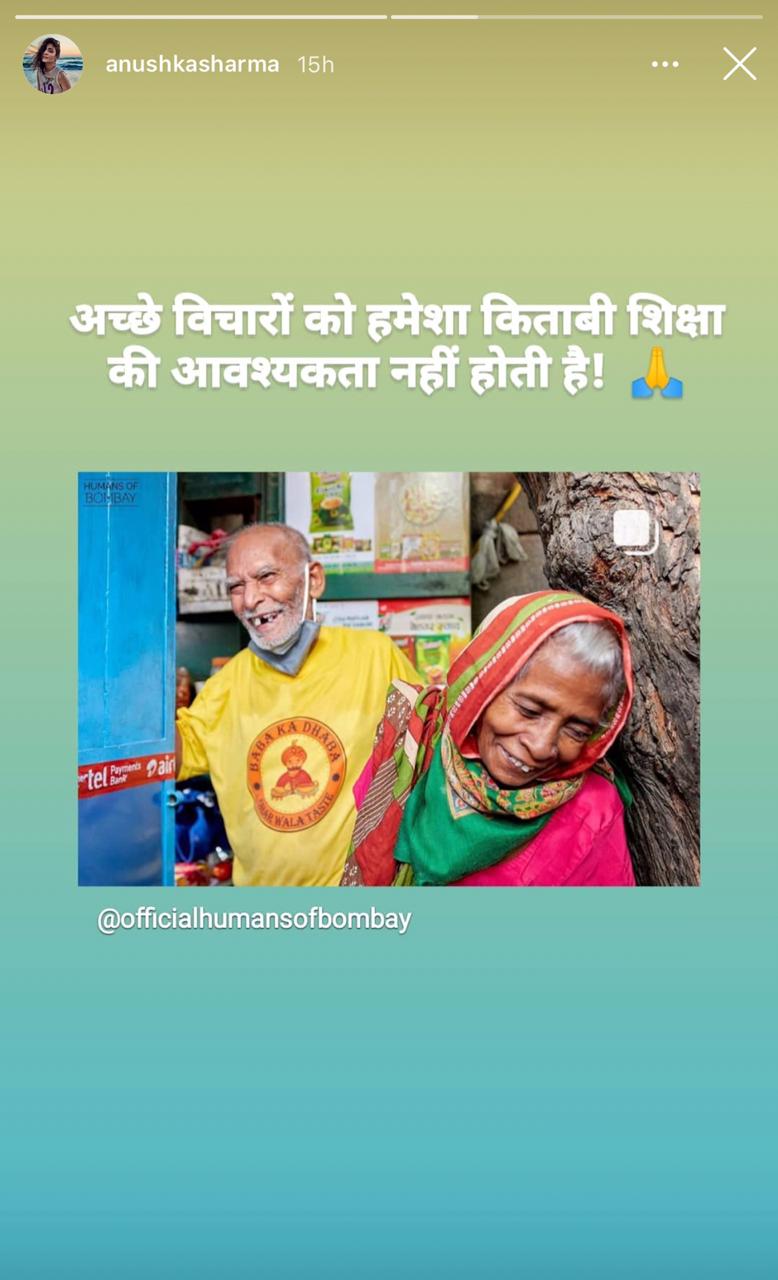 In her post, Anushka mentioned that people with good intentions don't need a book fed education in her Instagram story post. She also added a joined hands emoji as she shared the post with her fans and followers on Instagram. The story seemed to have touched Anushka deeply.

“I was 5 & Badami Ji was 3 when we got married in Azamgarh, UP. The only memory I have of the ceremony is of her hair in a braid; she looked like a doll. We thought we were attending a party–we wore new clothes, ate ladoos, performed rituals & went home. We had no idea we’d been married off; so when we met once a year, we’d reunite like old friends. As we grew older, the responsibilities of being ‘pati’ & ‘patni’ became clearer & at 21 Badami Ji came to live with me. Our friendship slipped into love–we’d grown up together & known each other our whole life. We’re luckier than most, but we knew we didn’t want our kids to have the same fate as us. So when I held our daughter for the first time, I decided to leave UP. We moved to Delhi in 1961. Here, I became a fruit seller. I’d get fruits from the mandi & Badami Ji would set up the stall. In the afternoons, Badami Ji would take over; she was a better saleswoman than me! As our family grew to 5, we began selling vegetables–we had our fair share of good & bad days. But we’d keep going for the times when we could afford chai & biscuit from a tapri. My favourite day is Friday though–that’s when Badami Ji makes aloo baingan! We then opened a chai stall. It took a toll on us financially, but Badami Ji had faith in me. I remember asking her, ‘Nahi chala toh?’ She smiled & said, ‘Koi baat nahi, kuch aur karengey!’ I wouldn’t have the courage to do anything without her. She may look small, but she has a strong willpower! So, in 1990, after hitting a half-century, we started Baba Ka Dhaba! Badami Ji does the chopping & I cook. There’s no ‘aadmi ka kaam’ or ‘aurat ka kaam’; 50-50 partners hain hum! But after lockdown, our business tanked; my older son also lost his job. We were barely scraping by–food was going to waste & we had no money to buy vegetables. Lekin waqt hain, badalta rehta hain–out of nowhere, a stranger came & took our video–the next day, we woke up to a line outside! Since then, all news people, company walas & customers have been coming & going. But when you were talking to Badami Ji just now, I overheard her saying, ‘Dekho iss umar mein bhi kitni mehnat karte hain!’Yeh toh best compliment hua na, madamji?"

In the post, fans can see the Baba Ka Dhaba elderly couple smiling. They both seem very happy and even show a thumbs up sign in the picture. The caption of the post talks about the journey of this couple.

In the caption, it is mentioned that the couple got married when they were just children in Azamgarh, UP. The couple were friends for a very long time and when they got a bit older, they moved in with each other. The post stated how the couple shares 50-50 responsibilities and also started 'Baba Ka Dhaba' together. The caption also detailed many other aspects of the couple's life.

Many fans and admirers liked and commented on the post. Most fans thought the story was heart touching. Other fans added that they really admired the couple. Take a look at fans' reaction on the original story: 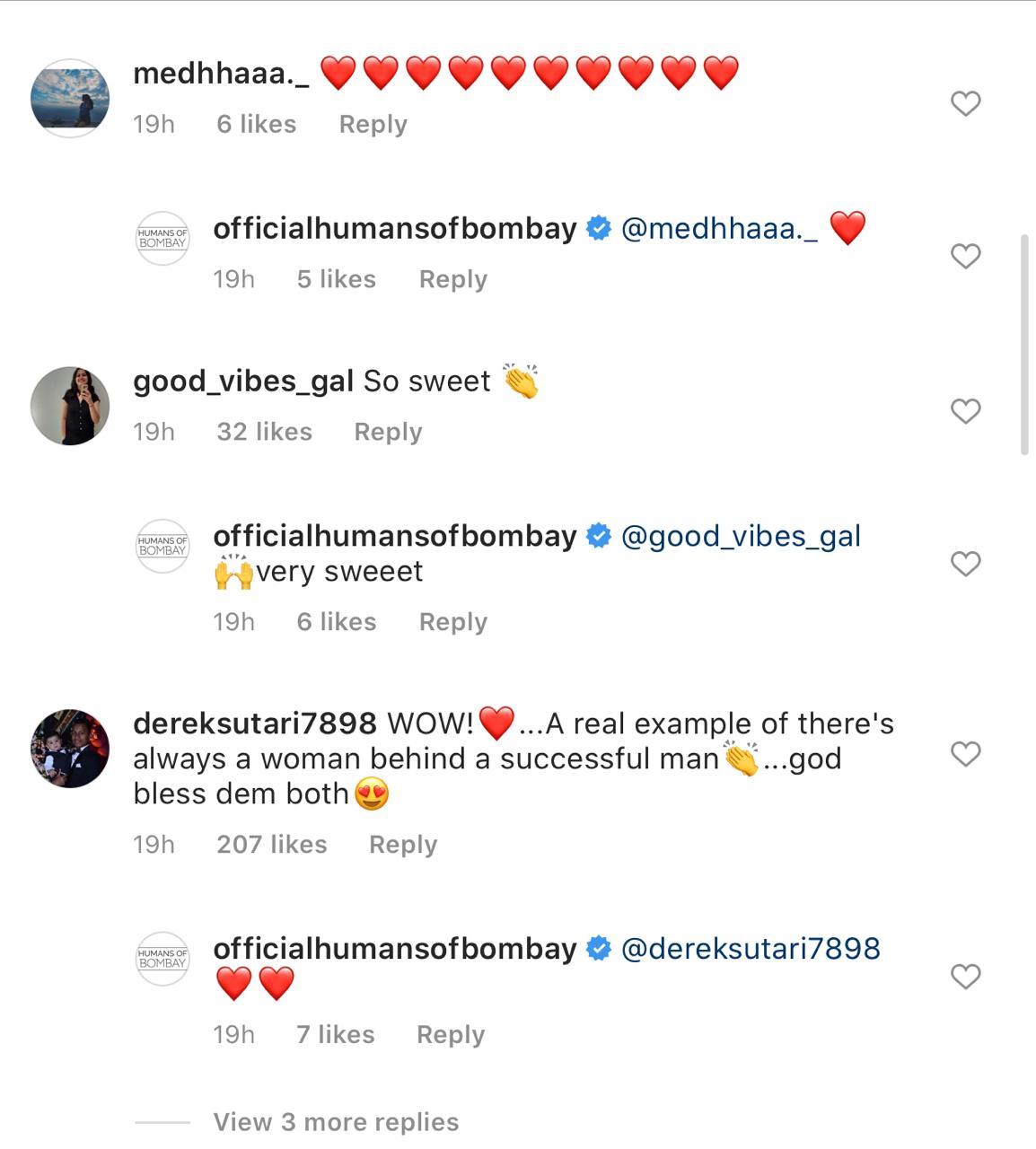 Actor Anushka Sharma is very active on her Instagram and recently shared a couple of snaps of herself on her page. In this post, fans can see the actor in a swimsuit and her baby bump is visible. Anushka Sharma and Virat Kholi will soon welcome a baby in January 2021. The post's caption had a very beautiful quote, the quote read - "Acknowledging the good that you already have in your life is the foundation for all abundance" - Eckhart Tolle. Take a look at her post:

"Acknowledging the good that you already have in your life is the foundation for all abundance" - Eckhart Tolle Gratitude to all those who showed me kindness and made me believe in goodness in this world , opening my heart enough to practice the same with the hope to pay it forward ðŸ’œ Because ... " After all , we are all just walking each other home " - Ram Dass #worldgratitudeday ðŸ’«