Since India implemented a national lockdown in March to tackle the COVID-19 pandemic, migrant workers have been setting out on foot to reach their hometown.

Since India implemented a national lockdown in March to tackle the coronavirus pandemic, migrant workers have been setting out on foot to reach their homes in other states. The workers have been facing the turmoil of getting back to their native town amid the lockdown. Recently a picture of migrant workers walking with their belongings and pets have won the hearts of the people on the Internet. Bollywood stars also poured in their love for the act of humanity.

Anushka Sharma who is an avid pet lover and staunch supporter of animal rights, shared the news on her Instagram story. The PK actress shared the piece of news where the migrant worker who is walking along the Nasik Highway in Maharashtra. The workers can be seen walking with their belongings which also included their pets, a dog and a duck. Anushka was touched by this beautiful gesture of the people and poured in her heart over the post. Apart from Anushka, Shradha Kapoor also shared the same picture on her Instagram story. The Baaghi actress shared her feelings over it. Shraddha thanked her friends for sharing such a beautiful picture with her so that she can share it further with her fans on social media. She also expressed her love over it with a heart-shaped emoticon.

Read: Anushka Sharma's Most Viewed IGTV Videos That You Must Check Out 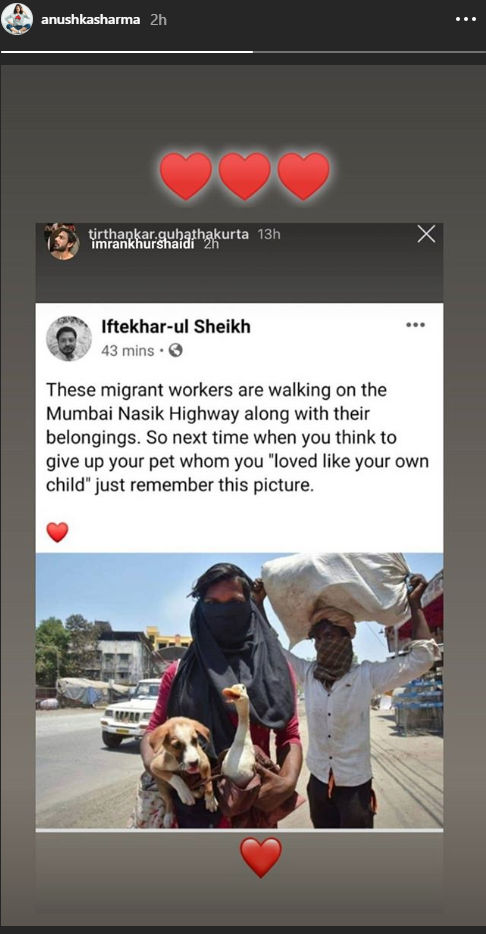 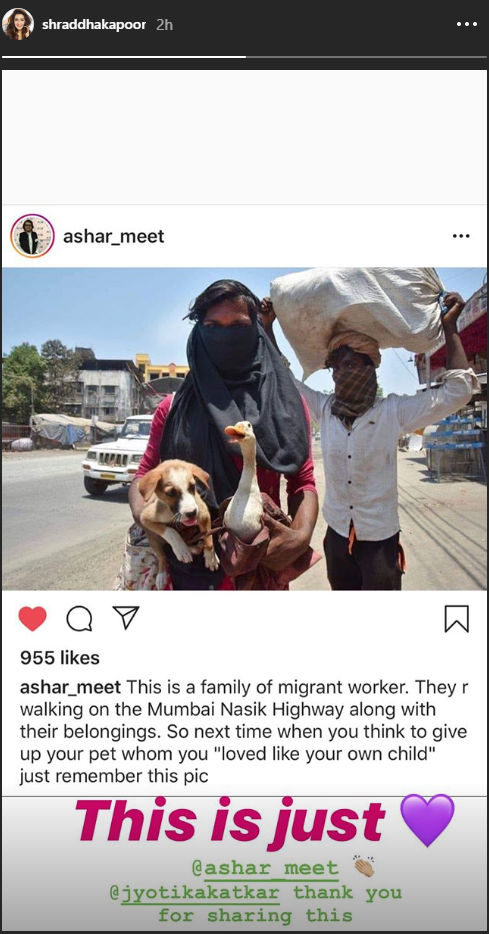 Over the past two months, there have been several reports of the workers being killed in road accidents or collapsing out of exhaustion. Recently the Aurangabad train mishap has given goosebumps to the people. The unfortunate incident happened at about 5.22 am on May 8 when a group of 19 migrant workers was hit by a goods train between the Badnapur and Karmad stations of the Nanded division. While 14 persons died on the spot, two others succumbed to their injuries subsequently. The injured persons were shifted to Aurangabad Civil Hospital.

Read: Anushka Sharma Urges Her Fans To Adopt More Dogs After Losing Her Own Pooch, Bruno