It looks like Aparshakti Khurana is following in the footsteps of his elder brother, Ayushmann Khurrana, who is known to be a man of multiple talents. Aparshakti seems to have decided to channel his inner singer yet again. He recently collaborated with Milind Gaba and King Kaazi to release the 'Dosti anthem of 2020' titled Teri Yaari. Aparshakti Khurana's latest song has taken the social media by storm amid COVID-19 lockdown.

Nushrat Bharucha is all praise for Aparshakti Khurana's latest track

The latest song has garnered over one hundred and four thousand likes on YouTube within a day of its upload. Fans are loving this song and are all hearts about it. Apart from the fans, several stars from the fraternity have also poured in their love for the song. Joining the bandwagon was an actress. Nushrat shared the song on her Instagram story to show her support to her friend Aparshakti. The actress appreciated the efforts of the actor and hailed his work on social media. Nushrat shared the song and captioned it, ' Oyeee Hoyee, Aparshakti Khurana, Lovedd ittt." 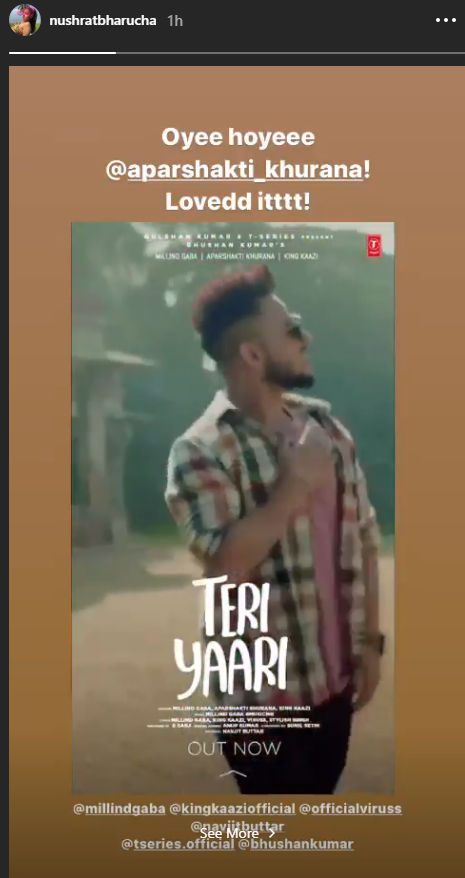 Apart from Nushrat, Judwaa 2 actor Varun Dhawan also echoed similar sentiments and praised the actor for his singing talent. Varun had earlier shared the song on his Instagram story and asked his fans to check out the song crooned by his "Paaji," (brother). The hit song is based on the lives of three friends and their togetherness. Its music video also depicts how time flies by, but the best of friends always stick together like a family.

The storyline of the song revolves around Aparshakti Khurana's marriage in the music video and how his friends, Milind Gaba and King Kaazi stick by his side through thick and thin. The song was released on April 28 by T-Series, on their official YouTube channel. Teri Yaari song is sung by Aparshakti, Milind, and King Kaazi, its lyrics are penned by Millind Gaba, King Kaazi, Viruss, and Stylish Singh. Furthermore, the music of Teri Yaari is composed by Music MG while the music video of the song is directed by Navjit Buttar.

PEOPLE HAVE PLEDGED SO FAR
LATEST NEWS
View all
10 hours ago
Anushka Sharma's sun-kissed pic to Arjun's fun video; entertainment recap of the day
8 hours ago
Varun Dhawan sings 'Humsafar' in throwback video, Alia Bhatt bursts into laughter
10 hours ago
Kangana Ranaut poses for a pic with sister Rangoli in her new house; Check out
8 hours ago
'Bored? What's that?' asks Milind Soman amid lockdown, says 'boredom is a choice we make'
5 hours ago
Vicky Kaushal cautions fans to stay safe, hopes rain showers don't bring 'too much drama'