Arjun Kapoor and Malaika Arora had the most fun conversation in the comments section recently. Have a look at how Arjun tried to troll her for the post.

Malaika Arora recently posted a picture of herself taking a nap amidst this self-quarantine period. The picture also had images of her friends and family napping while a collage was made out of it. Her alleged boyfriend Arjun Kapoor tried to troll her by indicating that she was posing while she was asleep, however, she had just the right thing to hit back at him.

Malaika Arora recently uploaded a collage picture where she and her friends could be seen napping. Arjun Kapoor, who is also her rumoured boyfriend, decided to point out the little smirk that Malaika Arora had on her face in the picture posted. He wrote in the comments section that she is smiling in her nap as well. He also expressed his fascination as he wrote the word “waah” at the end of the comment.

Malaika Arora, however, had the most befitting reply as she wrote that Arjun Kapoor is well aware that Malaika Arora smiles in her sleep. She has also added the finger on lips emoticon at the end of the comment. Have a look at their cute little conversation and the picture posted by her here. 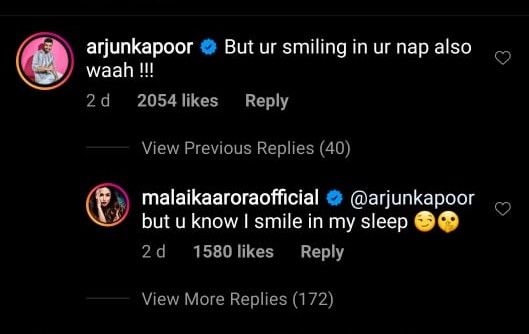 Malaika Arora has been using her self-quarantine time effectively as she has been looking after her health and following her hobby. She recently posted a video of herself cooking Malabari vegetable stew. Have a look at the post put up by the actor here.