Arjun Kapoor is quite active on Instagram as he is always seen sharing several pictures and videos giving fans a glimpse of his professional and personal life. Arjun Kapoor recently posted a video sharing his beauty secrets with fans.

Arjun Kapoor recently took to Instagram to share a video of him wearing a face mask posing in different angles along with a quirky song in the background. Along with the video, Arjun Kapoor also wrote in Hindi telling his fans they might be wondering the secret to his glowing skin. He went on to say that it were his different face masks. Check out the video below.

As soon as Arjun Kapoor posted the video, many of his friends and fans went on to give a quirky reply to his post. Among his friends was Katrina Kaif who also commented on the video. She commented saying “looking fresh” to which Arjun Kapoor replied in Hindi saying 'Thank you, madam'. Check out the comment below. 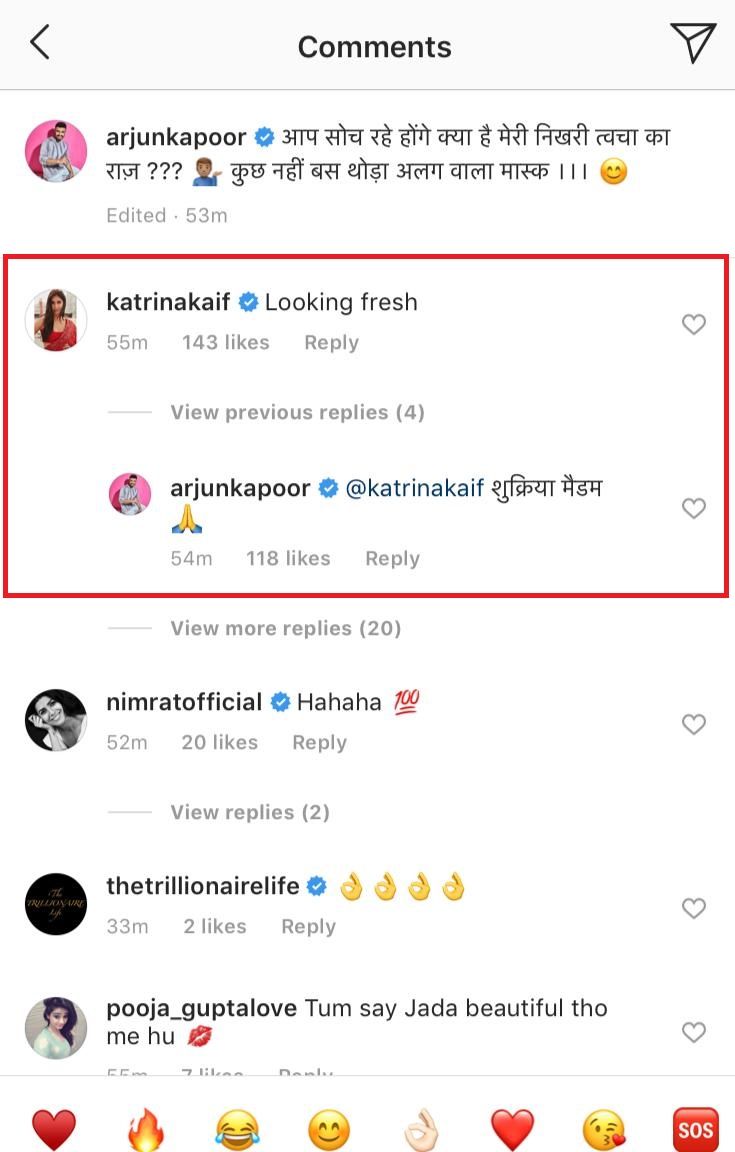 Arjun Kapoor and Katrina Kaif are always seen indulging in a fun banter as they keep commenting on each other’s posts and supporting each other at the time of need. The duo along with Varun Dhawan was seen having a video call as they could not meet in person. The three seemed very happy on the video call. Check out a few pictures below.

PEOPLE HAVE PLEDGED SO FAR
Parineeti Chopra almost took away lead role from Deepika Padukone & other 'Piku' facts
Hrithik Roshan opens up about facing stammering as a challenge; Read here
Anushka Sharma shares list of artists & songs that keep her going amid COVID-19 lockdown
Deepika Padukone reveals the one thing that she is most fearful of; Find out what it is
'We need to help each other': Kareena Kapoor pledges support to UNICEF, GIVE India & IAHV
DO NOT MISS
COVID-19 CASES IN MAHARASHTRA
PM MODI'S MOTHER DONATES RS 25,000
45 PEOPLE FROM TN TEST POSITIVE
NETIZENS HAIL ROHIT SHARMA
CM YOGI CONDEMNS BAREILLY INCIDENT
SPECIAL NIA COURT DENIES BAIL