Arjun Kapoor recently shared a hilarious video on how people will have to learn to leave home post lockdown. This video has left fans in splits.

Fans have been seeing Arjun Kapoor's goofy side social media even more amid the lockdown. Arjun goes on to share quirky pictures and often leaves funny comments on his friends’ posts too. And the actor has done it once again. Arjun Kapoor recently shared a hilarious video on how people will have to learn to leave home post lockdown.

Arjun Kapoor recently took to Instagram to share a funny video that has left fans in splits. In the video, a man can be seen exiting his home wearing black sunglasses and a casual outfit. And while he exits he goes on to get very excited and happy and starts grooving on Cha-Cha Slide song. The video was also captioned, “People learning how to leave the house again after self-quarantine is over.”

As Arjun Kapoor shared this quirky video, he went on to caption the post saying, “Just leaving this here... But for now, stay at home. Video credit - @therealrahulrai.” Check out the post below.

Arjun Kapoor’s friends and fans could not stop themselves from commenting on his post. Fans could not stop laughing at the post. Some of them wrote, “Hahahahaha likely as well,” “this is so funny,” “I can imagine people doing this,” and many more. Check out a few more comments below. 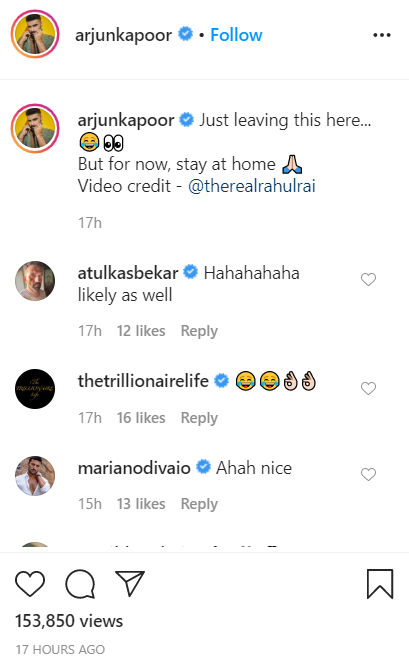 Arjun Kapoor is currently spending time with his sister Anshula Kapoor at his Mumbai home. And the avid social media user that he is, the actor has been keeping fans and his friends entertained through his social media post. The actor recently shared a video man playing cricket by himself on the terrace of a building. Along with the video, he also went on to ask Virat Kohli if he could relate to the video. Watch the video below.

The actor was last seen in Ashutosh Gowariker's period drama film, Panipat alongside Kriti Sanon. The film received praise from fans and viewers. Arjun Kapoor will next be seen in Dibakar Banerjee’s Sandeep Aur Pinky Faraar. The actor will be sharing screen space with Parineeti Chopra. The film bankrolled by Yash Raj Films and was supposed to release on March 20, 2020, but due to the coronavirus pandemic, the film has been delayed. The makers of the film also released a statement revealing the same.

PEOPLE HAVE PLEDGED SO FAR
LATEST NEWS
View all
1 hour ago
Jacqueline fernandez channelises her inner artist amid coronavirus lockdown, see pictures
38 mins ago
Hrithik roshan was convinced for a week to sport short hair in 'war', says hairstylist
1 hour ago
Swara bhasker hits back at troll who told her to "settle in pakistan", read details
18 mins ago
Sushant singh rajput pens thoughts about einstein’s theory, fans say 'really informative'
1 hour ago
Salman khan provides food kits to over 5,000 families on occasion of eid