Arjun Kapoor's 'mood' Is Inspired By The Office's 'Gun-Day' Moment

Actor Arjun Kapoor recently took to his Instagram story to share a meme from 'The Office'. The meme perfectly represented his 'Gun-Day' mood.

Despite the lockdown, Arjun Kapoor is busy entertaining his fans on social media. The actor frequently updates his page with daily updates, educational posts, and witty memes. Arjun Kapoor recently took to Instagram to share a meme from The Office, which perfectly explained his 'mood' for the day. 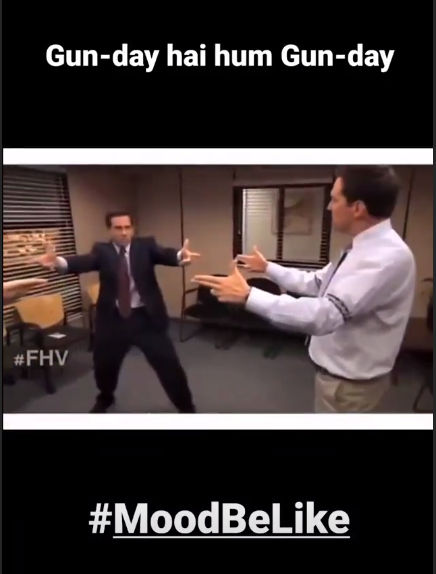 Arjun Kapoor recently posted a clip from an episode of The Office. The clip featured Michael Scott, Dwight Schrute and Andy Bernard in a make-believe Mexican standoff. The clip was from Season 6, Episode 10, Murder. In the episode, Michael Scott makes the office employees play a roleplaying murder mystery game to distract them from the fact that Dunder Mifflin is filing for bankruptcy.

Soon, Michael, Dwight and Andy get too engrossed into their characters and start taking the game way too seriously. Arjun Kapoor shared a clip of their standoff and tagged the post by writing, "Gun-day hai hum Gun-day." This was a witty pun on his iconic line from the 2014 action thriller film, Gunday. He also tagged the clip with '#MoodBeLike', telling his fans that he was remembering his old Gunday persona.

Gunday was one of Arjun Kapoor's most successful films, as it earned over â‚¹120 Crores at the Box Office. The film not only starred Arjun Kapoor but it also featured Ranveer Singh, Priyanka Chopra and Irrfan Khan in lead roles. Arjun Kapoor's performance in Gunday is also considered to be one of his best.

Besides entertaining his fans, Arjun Kapoor is also trying to use his massive fan following to spread awareness about COVID-19. He recently shared a video online where he humbly requested pet parents to take care of their dogs. He shared this video after several pet owners abandoned their pets over Coronavirus rumours.

A humble appeal to all the pet parents ðŸ™ðŸ» pic.twitter.com/xRGbBAlN26

PEOPLE HAVE PLEDGED SO FAR
LATEST NEWS
View all
10 hours ago
'Shameful': Neha Bhasin calls out Lockdown violators in Mumbai; Police springs into action
8 hours ago
'Choked' review: A sincere representation that hits the right chords
9 hours ago
Deepika Padukone gets angry after Ranveer Singh chats loudly with Ayushmann Khurrana
8 hours ago
Ranveer Singh or Saif Ali Khan: Who is better in the lead with Deepika Padukone?
10 hours ago
Abhay Deol raises an important question on fairness cream ads; Shibani Dandekar reacts