Ayushmann Khurrana took to his Instagram story to promote his upcoming film. The promotional technique used by the actor is unique and impressive. Read more.

Also Read: Ajay Devgn Meets His Lucky Charm Before The Release Of 'Tanhaji: The Unsung Warrior'

The makers of Ayushmann's upcoming film Shubh Mangal Zyada Saavdhan launched a small teaser of the film. The teaser has received an overwhelming response from the audience.

Later, the actor has entered ShubhMangalZyadaSaavdhan in the category of re-enter new password. The new password entered is now showing as a strong password. This unique promotional trick is being appreciated by Ayushmann's followers. 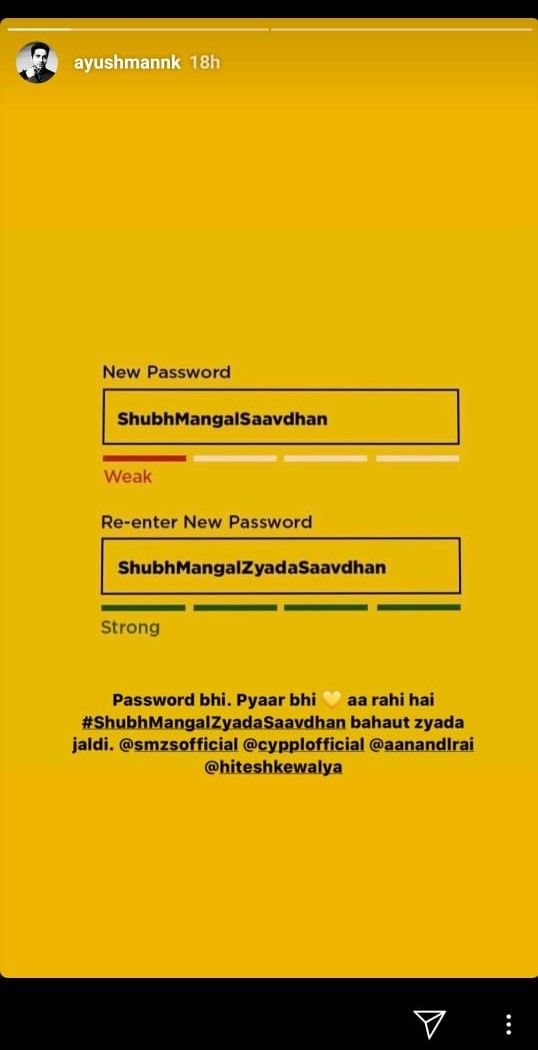 Earlier, Ayushmann Khurrana has shared the poster of Shubh Mangal Zyada Saavdhan on his social media account. The poster which was shared by him also had a quirky caption "Bhaagte Bhagate aa rahe hain hum, #ShubhMangalZyadaSaavdhan - Releasing on 21st FEB 2020".

The film Shubh Mangal Zyada Saavdhan is based on the topic of homosexuality. The film is directed by Hitesh Kewalya. The romcom is scheduled to release on February 21. Apart from Shubh Mangal Zyada Saavdhan, Ayushmann will also be starring in Shoojir Sircar's comedy-drama Gulaabo Sitaabo which will release on February 28. In the film, he will be seen sharing the screen space with Amitabh Bachchan.

Also Read: Chris Evans Shares An Adorable Picture Of His Dog Wearing The 'Knives Out' Sweater

Also Read: Henry Cavill Was So Obsessed With Geralt Of Rivia That He Did Something Unbelievable