Ayushmann Khurrana's Fan Sends A Heartfelt Note, Says THIS To The Actor

Ayushmann Khurrana recently received a heartfelt appreciation note from one of his many fans while he was on a plane. The actor later shared the note online.

Ayushmann Khurrana is known for being a part of content-driven films that always manage to share an important message while still being fun and entertaining to watch. Due to his great script choices and his brilliant acting talents, Ayushmann has amassed a massive fan following that respects him for his films. Recently Ayushmann Khurrana received a beautiful message from one of his many fans. The Bala actor even posted this note on social media and thanked the fan for his appreciation.

Ayushmann Khurrana's fan gives him a heartfelt note, thanking him for his amazing films 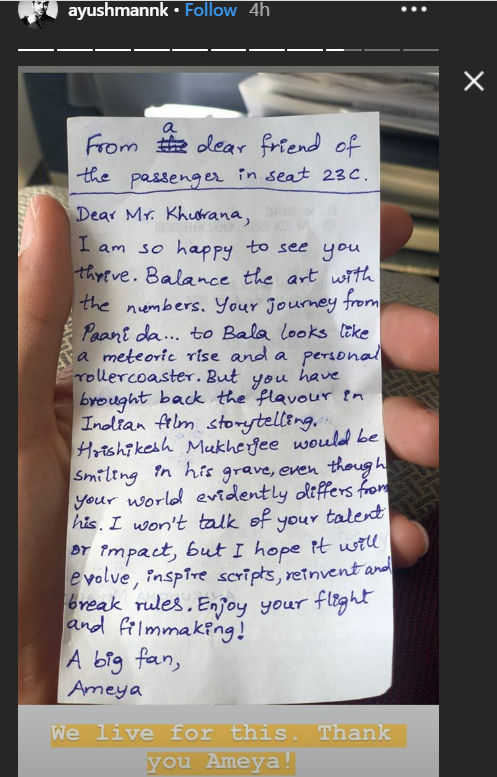 Ayushmann Khurrana recently posted a picture of a note, that he received from one of his fans, on his Instagram story. The note was given to Ayushmann while he was travelling on a plane. The fan, named Ameya, started off the note by stating that he was happy to see Ayushmann thrive.
Also Read | Ayushmann Khurrana, Jitendra Kumar, Neena Gupta, Gajraj go "zyada" on social media

Ayushmann Khurrana's fan then wrote that he loved the way Ayushmann balanced work with numbers. The fan also added that Ayushmann has brought back the flavour in Indian film storytelling and that his journey was like a meteorite rising. Later in the note, the fan wrote that Hrishikesh Mukherjee would be smiling in his grave upon seeing Ayushmann's progress in the industry.

Ameya then ended the appreciative note by stating that he would not talk of Ayushmann's talent or impact. But he hoped that it would evolve, inspire scripts, reinvent and break rules. In the caption for his Instagram story, Ayushmann Khurrana thanked Ameya and stated that he lived for this.