Ayushmann Khurrana has changed his look tremendously amidst the coronavirus lockdown 4.0 and has turned into a "caveman". Read more to know.

Bollywood celebrities are making the most of their time in lockdown. They are trying to learn new skills, become more productive, helping in the household chores, as well as contributing to society. Actors have also been seen getting quarantine haircuts. But some actors are avoiding haircuts altogether. Bala actor Ayushmann Khurrana is one of them. Read further ahead to know more details:

Things are going quite well for actor Ayushmann Khurrana, which is evident from his posts on Instagram. He has not trimmed his beard and is showing it off to the world through his social media posts. Recently, the actor took to his official Instagram handle and posted a photo where he is seen without a shirt, showing his rugged new look to the world. He has captioned this photo saying that it is his caveman session. 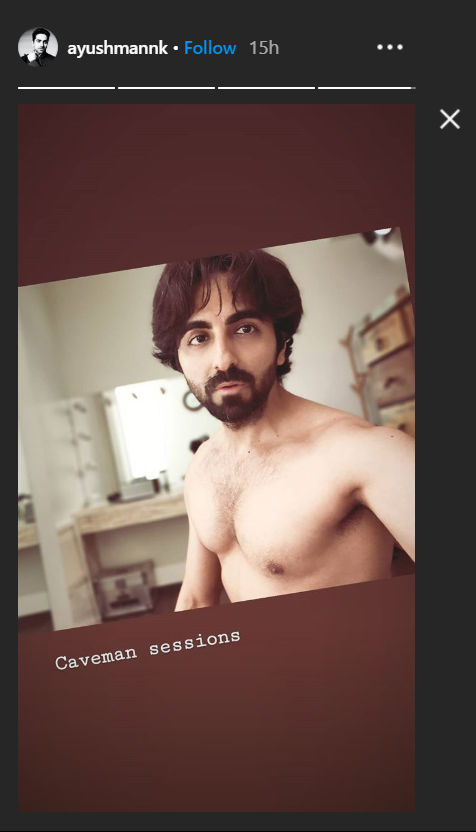 In an earlier post by the actor, who is sharing photos of his workout on his Instagram story section, stated that “the caveman is ready for a workout.” He is one of those several Bollywood celebrities who are trying to be fit during the lockdown. Earlier, fans have seen that Hrithik Roshan, Rakesh Roshan, Anil Kapoor, and Rajkummar Rao have been working out to stay fit and healthy. These celebs have posted photos and videos of their fitness regime on their official social media handles.

On the work front, the Article 15 actor will next be seen in Gulabo Sitabo. It will be directed by Shoojit Sircar. The film will feature Amitabh Bachchan, Ayushmann Khurrana, and Nalneesh Neel in the lead role. The film will be a family comedy film and was set to release on June 12, 2020. Due to the lockdown, the release date of the film will be postponed and nothing has been made official yet by the makers of the film.

Khurrana was last seen in Shubh Mangal Zyada Saavdhan, which was a romantic comedy film and featured Jitendra Kumar along with Khurrana. It was directed as well as written by Hitesh Kewalya. It revolves around a gay couple and how they try to convince their family to give blessing to their marriage.

PEOPLE HAVE PLEDGED SO FAR
LATEST NEWS
View all
3 hours ago
Maanvi Gagroo receives apology from the fashion brand that used her pic & body shamed her
24 mins ago
Can hand-sanitizer catch fire? Amitabh Bachchan shares an experiment video
2 hours ago
Kriti Sanon gets poetic with random thoughts amid lockdown, calls herself 'old soul'
1 hour ago
Pankaj Kapoor's solid net worth is a result of his illustrious career; Check details here
1 hour ago
Amitabh Bachchan helps migrant labourers by arranging transport service for them; details